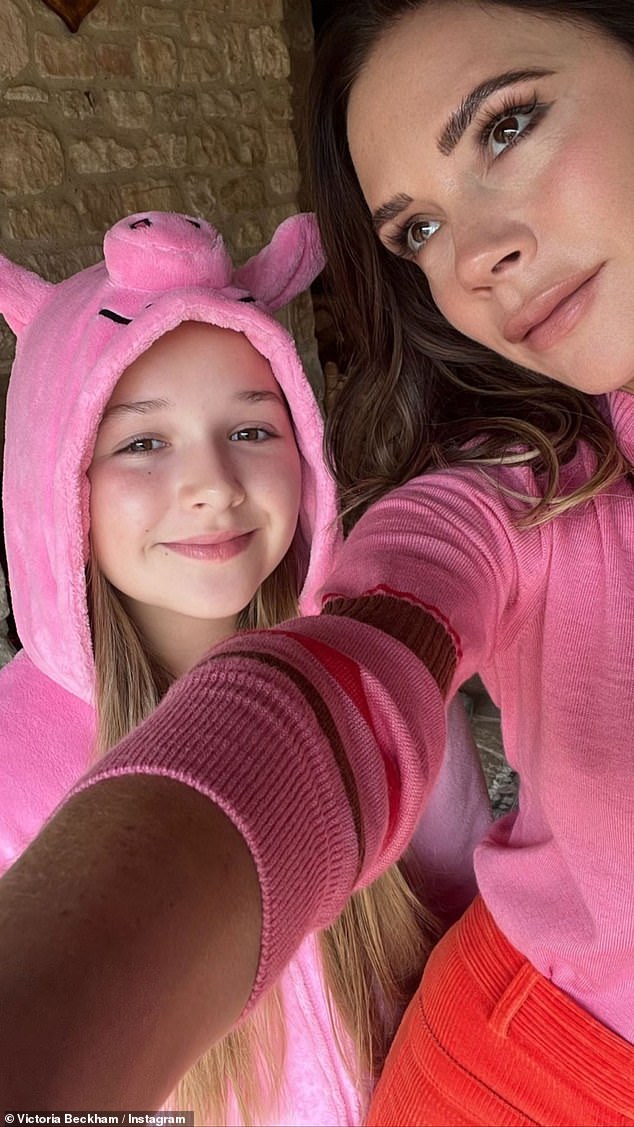 Victoria Beckham beamed as she shared an adorable selfie with daughter Harper, who dressed up in a pink pig onesie on Sunday.

The fashion designer, 48, seemed in high spirits as she posed for an Instagram snap with her 10-year-old daughter.

Victoria looked incredible in a light pink wool jumper which she paired with red corduroy trousers.

Stunning: Victoria Beckham, 48, beamed as she shared an adorable selfie with daughter Harper, 10, who dressed up in a pink piggy onesie on Sunday

The beauty opted for a glamorous makeup look, including a nude lipstick, and kept her brunette tresses in loose waves.

The pop star held out her phone to capture her best angles while Harper beamed to her left, appropriately pink.

The youngest of the Beckham family wore a piggy ensemble as she tucked half of her long blonde locks under the hood.

Loved up: Victoria recently caught her husband David in the act when she snapped him as he peeked over the door of their dressing room checking them out on her Instagram

They have been married for over twenty years but her husband, 46, still can’t take his eyes off his wife.

Victoria recently caught the former footballer in the act when she snapped him peeking over her dressing room door and appraising her as she modeled one of her latest designs.

She looked incredible in the fitted black mini dress which also showed off her long legs as she shared a slew of snaps on her Instagram profile on Friday.

Flawless: Victoria beamed as she gave some of her 29.9million followers a glimpse of her youthful complexion

Victoria wowed in the sleeveless ensemble, carefully designed to show off her slender frame.

She paired the look with a pair of classic black stiletto heels as she dressed up at home in her huge walk-in closet.

Her brunette tresses were styled in loose curls with a center parting and she opted for a glamorous makeup full face with a parted lip for the fun afternoon.

The pop star also showed off another stunning design from her new VB Body line, which she promises will fit all shapes and sizes.

Victoria flaunted her incredible figure in a bright red one shoulder top which she paired with a matching skirt.

The stylish outfit hugged her fantastic figure and showed off her toned arms while showing off her tiny waist.

Blush Babe: The pop star also showed off another stunning design from her new VB Body line, which she promises will suit all shapes and sizes

The stunning pictures come after she joked she was the star of her latest bold fashion campaign as she took to Instagram on Tuesday to debut Victoria Beckham’s body.

The fashionista shared a “cheeky” black and white photo of a mysterious thong-clad bottom as fans rushed to comment on what they thought was Victoria’s bum.

The former Spice Girl wrote, “Yes that’s MY BUTT!” as she laughed at the gushing comments on the sultry post.

Sexy! ‘Yes, that’s MY BUTT!’ It comes after Victoria joked that she was the star of her daring fashion campaign as fans gushed over the “cheeky” shot on Instagram on Wednesday

Victoria’s followers responded in their treasure troves with a slew of fire emojis and peaches as they called the designer “cheeky.”

Written on fan: “Is that VB?” while another added: “You are amazing!”

Another joked: “Can we order new bottoms online?”

Oops! To clear up the confusion, the former Spice Girl later wrote, “Yes that’s MY BUTT!” as she laughed at the gushing comments on the sultry post

Victoria took to her story and later shared a screenshot of the mysterious butt while joking that it was hers.

A video showcasing the pieces featured a model wearing a series of skintight black ensembles with bare cleavages.

Gushing comments: Victoria’s followers responded in their treasure troves with a slew of fire emojis and peaches as they called the designer “cheeky”.

Pareto perfects the 20% of the clothes women actually wear

Global manual sewing machine industry is projected to grow 1.5x from 2022 to 2032