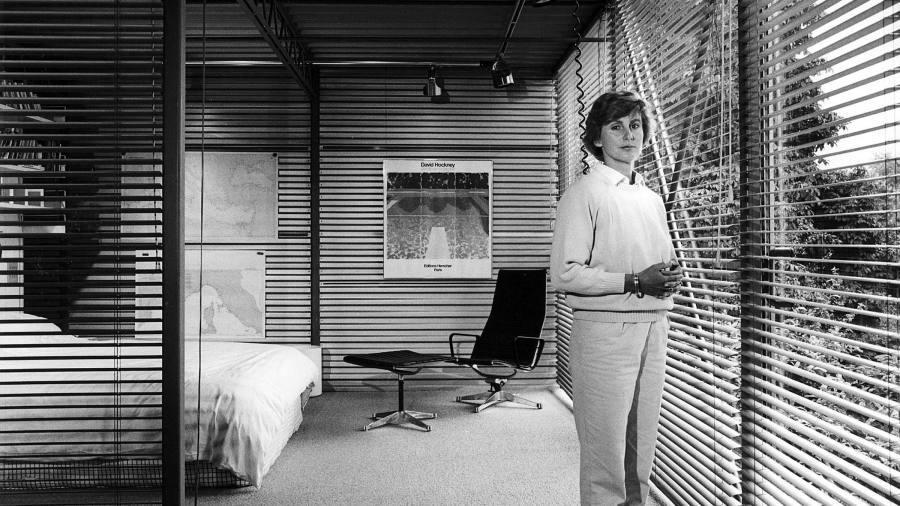 A plan is an abstract thing: a schematic representation of space in the most codified and flattened way. Yet so much information can be inscribed between those thin dark lines. “If anything is described by an architectural plan,” wrote historian Robin Evans in his influential 1978 essay Figures, Doors and Passages, “it is the nature of human relationships.”

Building on Evans’ ideas, architect Charles Holland and artist Di Mainstone have created an eccentric but grandiose small exhibition at London’s Royal Institute of British Architects (Riba). Through an examination of architectural drawings in the Riba’s superb collection, Holland points to an alternative path through a more marginalized architecture and points to the direction the industry would have taken had it allowed, or at least appreciated, a more prominent role for women in design.

Up until the 20th century, the record of women’s role in architecture is sketchy at best, often misleading, always understated, occasionally bizarre. Take cousins ​​Jane and Mary Parminter, for example. They renounced marriage, embarked on a decade-long grand tour and, upon their return in the 1790s, set about building themselves an odd house at Lympstone, near Exmouth in Devon.

If most bourgeois homes of the era were defined by a classical portico, symmetry, and Italianate details, this was not the case. A 16-page plan with a conical thatched roof and diamond-shaped windows framed in lipstick red, A la Ronde, was completed in 1811 and was designed for daily occupation of the rooms following the course of the sun.

The Parminters were not architects (the plan was probably drawn up by a teenager who later became an architect), but their references and expression were refined. The house was influenced by the Byzantine Basilica of San Vitale in Ravenna. The three-height hall exudes hypnotic elegance and the rooms have been adorned with everything from seashells to feathers.

It sits somewhere between the follies of the era and Benthamit’s vision of the panopticon that became the model for the prison and that Michel Foucault, the French philosopher, would later use as a metaphor for the surveillance society.

Or see the amazing Hardwick Hall (1590-97), always attributed to Robert Smythson but heavily influenced by her patron Elizabeth, Countess of Shrewsbury or ‘Bess of Hardwick’. Bess was deeply involved in the design of her previous home, a small house called Chatsworth. Hardwick is often seen as the first British house to show the influence of continental classicism, but also as a possible – and credible – forerunner of modernism, with its huge windows that look almost like glass curtain walls.

Here the traditional hierarchies of entry and collection were abandoned. Instead of corridors and lobbies, what is immediately striking upon entering is the great hall, and the raised dais at one end, the traditional position of the Lord of the Manor, is no longer present. Instead, the most imposing state rooms are on the upper floor and offer magnificent views of the estate, their tapestries are replete with images of Diana, the hunter goddess. We may remember that this was the era of Elizabeth I and every magnificent home had to be designed with the expectation that she might come to stay.

A more modern aristocratic woman, Eileen Gray, also makes an appearance on the show. A Scottish-Irish designer of independent means, Gray didn’t need to hire an architect. In fact, this was an apartment she designed for a male architect, her friend and likely lover Jean Badovici.

Gray is best known for her home E-1027 on the French Riviera, but this lesser-known home for the same client, a studio apartment on Paris’ rue Châteaubriand (1930-31), is just as stunning in its own way. All the action takes place counterintuitively in the Circulation, a small hall of movement, texture, light and pattern.

Georgie Wolton’s former partners Richard Rogers and Norman Foster were better known, but she was the senior partner

With a silver curtain and foldable, perforated aluminum walls, Gray created a more theatrical effect than any 3m x 4m room (which included a toilet, cupboards and kitchen) deserved. Fluid and flexible, it could be transformed with a flick of the wrist to change the position of the curtain or the screens, which when closed created a delightful moiré pattern that foreshadowed Victor Vasarely’s Op Art canvases.

There’s more here: homes designed by women that were once attributed to men, and homes made for neglected designers or clients. There is, for example, the high-tech house that Michael and Patty Hopkins designed for themselves in Hampstead in 1976, with Patty eventually giving her due place as lead designer.

And there’s Georgie Wolton’s 1969 Crocknorth house, a pure piece of modernism never seen before in England. As an architect, Wolton, who died last year, has been slightly neglected by the history books. Her former Team 4 partners Richard Rogers and Norman Foster became better known, but it was she who provided the first professional qualification during college – the senior partner.

All of these discoveries and surprises play out against an occasionally raw, sometimes contemplative soundscape that accompanies Di Mainstone’s extraordinary installation. With a big helping of Bauhaus-era Oskar Schlemmer, a dash of Styrofoam-era punk, a little Priscilla Queen of the Desert, and a dollop of London dirt, Mainstone (who trained as a fashion designer) animated some of these women as extremely vivid characters, in insane costumes, rich in pattern and movement, unwilling not to be heard. It’s funny, visually stunning, and occasionally a bit annoying.

Holland’s design of the exhibition itself is by far the best I’ve seen in this quirky space in Riba’s otherwise great HQ. The carpet, walls and curtains show patterns abstracted from architectural motifs of the buildings on display.

And the curtains, inspired I believe by Eileen Gray’s foyer, can be drawn to reveal the “archive,” the drawings that underpin all of this history. The action of pulling a curtain to look at a drawing makes it theatrical, with hints of something Psycho to a puppet show and the slightly clunky metaphor of revealing a hidden story. But unlike many architecture exhibitions, it’s fun and engaging with its mix of irreverence and incredible artifacts.

There is no overarching theory here, no radical revisionist view beyond the obvious that women have been advertised for centuries and that exploration of their entanglement in a history recorded primarily by men continues to reveal a far more complex, interesting and surprising architecture.

Radical Rooms: Power of the Plan, through July 30; architecture.com

Edwin Heathcote is the FT’s architecture and design critic