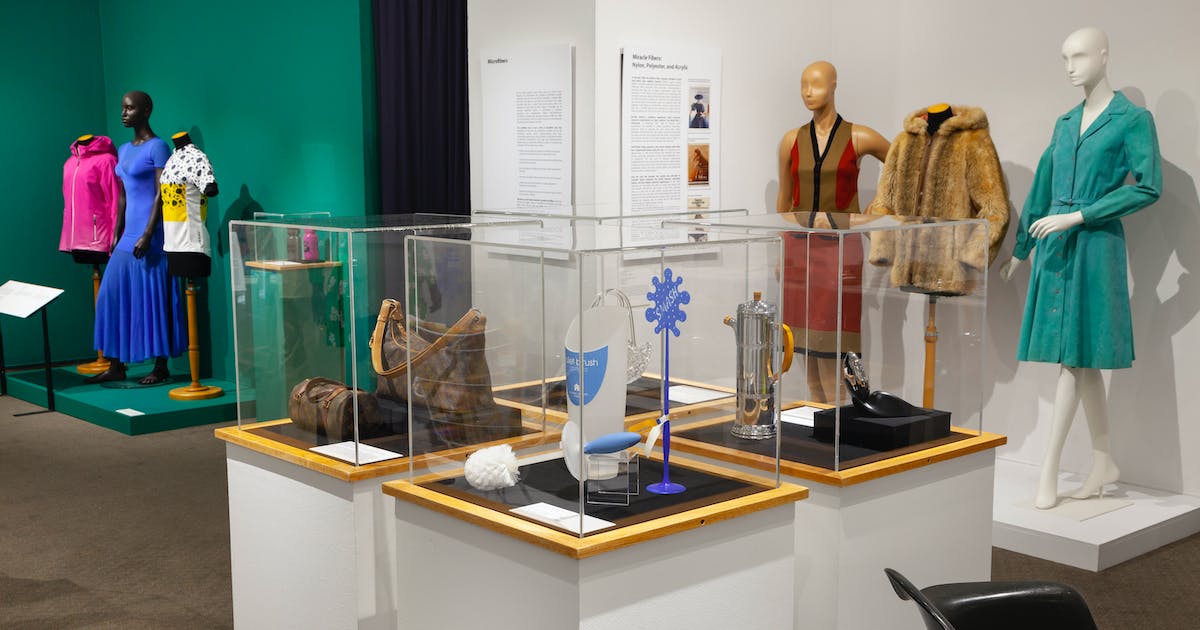 Plastic: It’s all around us – from our sneakers to household products to the food we eat.

Although the news about plastic is rather grim these days – 91% plastic is not recycled and 50% plastic is produced for one-time use — the exhibition “Plastic Rapt: A History of Design Forever” at the University of Minnesota’s Goldstein Museum of Design takes a holistic approach.

Using objects from the museum’s permanent collection, the exhibition discusses the harmful effects of plastic while providing a broader picture of how plastic came about. Objects on display include 70’s style clothing, vintage Mac computers, combs and celluloid objects.

“We don’t always have collection-based exhibitions, but I thought plastics would be fun to look at – it’s something we all like to smear,” said interim director Jean McElvain. “We wanted to show why it’s bad, but also why people love it so much in product design and how addicted product companies are to quirky, colorful pieces.”

Of the seven main types of plastic that exist today, the show focuses on four. The most common is polyethylene (PE), which is found in high density (used in milk churns and garden furniture) and low density in plastic bags. Polypropylene (PP) is mainly used in textiles, furniture and food packaging. Polyvinyl chloride (PVC) is a rigid and flexible plastic used in pipes, credit cards, and records. Polyethylene terephthalate (PET), known as polyester, is used in fibers and soft drink bottles.

The random objects at the fair, which come in many colors, shapes and sizes, including chairs, an old rotary phone and wall clocks, are all made from heavy plastic components. Napkin rings in the shape of an orange elephant, red bird, or brown bear are as fake as they come and are made from Bakelite, the world’s first synthetic plastic derived from celluloid. A cream-colored hair comb with long spikes looks like it’s made of ivory, and another looks like tortoiseshell. In reality they are both made of celluloid.

“Initially, plastic was almost seen as a way to be a conservationist because it doesn’t kill a turtle [for its shell] or an elephant for its tusk, you would make the object out of plastic,” McElvain said. “It’s a reversal of how we see it today.”

Those interested in fashion history will also like “Plastic Rapt”. There’s a ruffled red blouse designed by synthetic fabric-loving Japanese designer Issey Miyake. Several mannequins are dressed in 70’s style leisure suits and look like they’ve walked off the Mad Men set. A pair of women’s rain boots called “drizzle boots” are made of beige clear plastic (most likely polyethylene) and even have room for the heel. Two iconic Louis Vuitton monogrammed bags may look like leather, but they’re actually made of polyvinyl chloride.

Plastic is also used to mimic other materials such as silk, suede, fur, and wool. His versatility is evident in a teal ultrasuede shirt popularized by fashion designer Halston.

We also learn that the first plastic, celluloid, had nothing to do with bottles or bags and had everything to do with billiards. In the 1860s the game grew in popularity but there was a shortage of the ivory used to make the billiard balls. So when a New York company offered $10,000 to anyone who could find an alternative to ivory, John Wesley Hyatt came through in 1868 by discovering the process of making celluloid.

The show points out that while plastic has historically provided useful alternatives, it’s not meant to last forever. A photo of eroding blue plastic chairs in an outdoor sports stadium addresses the paradox of the material. Similarly, a pair of 1960s cream-colored fiberglass-reinforced polyester go-go boots now look like a heap of chipped paint.

“One of the interesting things about plastic is that while it never goes away, it doesn’t last,” McElvain said. “There’s this irony — you’re kind of in this bind where a lot of this feels irreparable, but it’s not going to go away forever.”

Estee Lauder envies Tom Ford’s scent. Does it like its fashion?