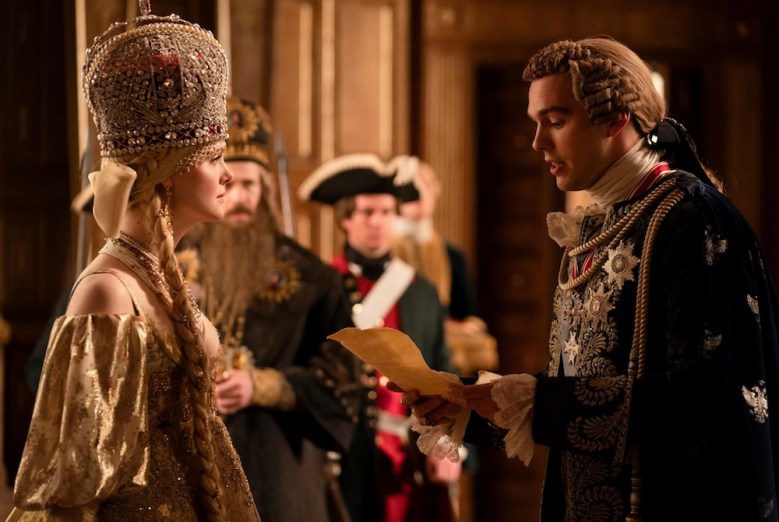 When we think of historical drama, the image that we have in our heads is always tied to the setting of a show. The setting is an interesting moment in historical or imaginary time, separate from our own, but the setting is that too Things inside; everyone looks so different. Sometimes that stuff means swords and armor and dragons, and the martial, fantastical nature of a Game of Thrones makes it visually distinctive.

But even if chain mail is not involved, it is the look of the costumes that brings us closer to characters from the past or makes them appear all the more imposing and distanced. It’s the one place where maximalism and extravagance are always acceptable—Bridgerton isn’t a costume show; The costumes are the show in many ways.

Costumes also offer the most subtle, intuitive character distinctions – the cut of Hansu and Isak’s cloaks in “Pachinko” tells you everything you need to know about how they move through the world. It’s all the more gratifying when a show can do both.

“The Great” has costumes that match his palatial surroundings in gilding and detail – this is Russia, after all. But they also convey the different approaches characters use to seize and hold Imperial power. Of course, it makes sense that it’s a story about emperors and empresses, even a comedy that pokes fun at who counts; and The Great costume designer Sharon Long helps visually convey the show’s power structure between the imperial couple. For Catherine’s coronation gown, alongside gilding Elle Fanning all in gold in a deliberate nod to Russian icons, “we ended up getting her really high heels, you know, [so that we could] Raise them up, make them bigger so Peter will be less impressive,” Long told IndieWire.

Catherine’s attempts to spread her values ​​at court, and her relative position within them, is something the show’s costumes always briefly portray. “She’s still a purist and an idealist, and she’s still pretty clean [in her look] compared to the women at court, who are quite over the top and overdressed,” Long said. “She didn’t wear any in Season 1, which was actually a really good way to keep her really young. So we just did a little bit [more in Season 2]. It’s really kind of a gradual increase.”

Anyone who is more or less sure of their position can always be seen with “The Great” by how the environment harmonizes with the individual choice of style. While the show is never overly flashy about its fashion, there are moments when costumes take the lead, visually showing how a character is on a whole other level and can bend the world to her will, like Gillian Anderson did does when Catherine’s mother Johanna appears at court and lets it circle around her for a moment.

“The size of her skirt was an interesting tool,” Long said of the character’s costume choices. “We kept her top as small and tight as possible and her skirts as roomy as possible, and she moves through the set and takes up space.”

For Peter, the happily deposed Emperor on the back heel (and he wears at least a bit of a heel in more formal situations) wears less clothing all season the more unattached he is. He quite often stumbles around in nightgowns and the Russian equivalent of a bathrobe, anticipates the ghosts of his mother and father and his moments of genuine connection with Catherine throughout the season, and tends to dress very simply. That’s impressive for a man wearing skirts to his own wife’s baby shower.

“He’s so manly that he doesn’t care if he wears pink or a full-front shirt or a lace shirt,” Long said. “I feel like I pushed him a bit and tried to separate him from Grigor slightly [played by Gwilym Lee], sometimes only in colors. Grigor gets a little more into the blues and the animal print isn’t that prevalent, you know. Although they were best friends and emulated each other, [Grigor and Peter] started to develop [different styles].”

This ability to slowly follow the characters’ development through the costumes, even while staying at a baseline of exuberant complexity, has a long story in stories about Catherine the Great. That’s important for a show like The Great, which happily mixes comedy and outright power politics. It challenges the audience to see the characters as they stand in court, to judge them by the people they present, how strongly those ideas are expressed in their fashion, and to see how they present themselves, perhaps too a lot of. In doing so, Long and her team pull out the best power move historical fiction has in its arsenal: to show us that we’re not that different after all.

Registration: Stay up to date on the latest movie and TV news! Sign up for our email newsletter here.