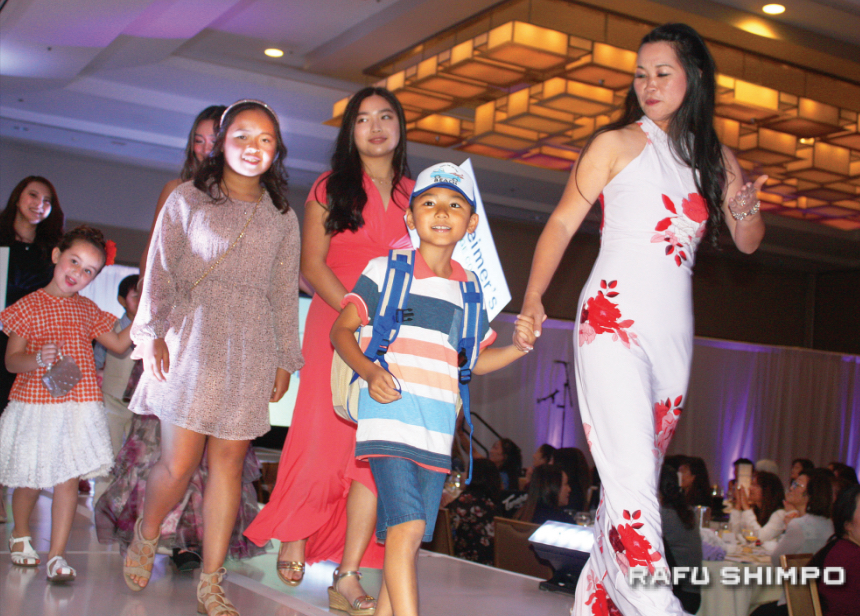 The fashion show returns with a hopeful theme; So Phis event postponed by 2 years due to pandemic

The event was abruptly canceled in April 2020 and for the 500 attendees at the Hilton Anaheim it was a chance to see people again and enjoy an event that has been raising funds for charity for 62 years.

Stacey Yoshinaga and Rolene Hamamoto, coordinators of the fashion show, greeted the guests with gratitude and emotion.

“Our theme this year is ‘Hope, Dream, Inspires… Lights the Way’ and we felt it was an appropriate theme as it reflects what we at So-Phis are trying to do, which is to improve our world. Our goal with our fashion show is to help pave the way for as many charities as possible,” said Yoshinaga.

Yoshinaga noted that when So-Phis had to abruptly cancel two years ago, 700 Furoshiki wraps were already printed with the year 2020.

“We ask that you use them as a reminder of what we went through in 2020,” she said. “But I would like to point out that the perishables in the goodie bag are fresh.”

Hamamoto was on the verge of tears as she addressed her greetings to the crowd.

“We missed face-to-face meetings. We didn’t realize how much we missed it until you were actually able to touch, hug and greet each other, friends and family. It regenerates my soul and I know it does the same for you,” Hamamoto said. “So-Phis is so grateful to all of you for believing in us and supporting us for so many years.”

Helen Ota and Aaron Takahashi served as presenters for the event. Takahashi first appeared in boxer shorts and slippers.

“I thought the fashion show was going to be on Zoom!” he exclaimed.

Attendee numbers were limited due to indoor event requirements and COVID protocols were enforced.

In a slide presentation, So-Phis alluded to the events that have transpired since they last met: the deaths of Kobe and Gianna Bryant, the Black Lives Matter movement, anti-Asian violence and the current crisis in Ukraine as well happier events like the victories of the Dodgers, Lakers and Rams and the Tokyo Olympics.

Ota and Takahashi shared their own news. Ota got married during the pandemic and Takahashi and his wife had a baby girl, Sherilynn, who has bravely endured treatments for brain cancer.

“She’s one of the strongest fighters I know… She’s fine now. She has had six rounds of chemo and is on the way to recovery. Thank you So-Phis for your support,” said Takahashi, who shared that the women would bring meals to the family.

After acknowledging the difficulties of the past two years, the show focused on what brought everyone together – good times, colorful fashion and supporting charities that help others in the community.

A number of models walked the runway in designer clothes from Masako Designs, a women’s sportswear label run by Margaret Masako Cummins; Hide and Squeak Kids, a boutique children’s clothing designer in Irvine; and Macy’s. The show also included a boutique and a silent auction.

The men, including Alan Kosaka, Glenn Tanaka and David Yamahata, enjoyed bantering and good-naturedly whistling with the crowd.

Graceful and elegant, the women struck striking poses as participants took photos with their cellphones. Among them, Olympian Sakura Kokumai, who is set to appear in 2020, joined the models on the catwalk and shared her memories of the Tokyo Olympics. Kokumai is no stranger to fashion and became a face of Ralph Lauren during last summer’s games.

“I was born in Hawaii and grew up in Hawaii and Japan. Representing the United States in Japan, where karate originated, was such an emotional feeling,” Kokumai told the audience.

Speak with The RafuKokumai contrasted the experience of walking the catwalk with a karate competition. Her next big competition is in Portugal. She noted that while American fans saw her on Ralph Lauren billboards, she never got the chance to see them.

“I had a bomb. It’s my first time walking the catwalk. I was nervous at first, but I enjoyed every single second of it,” said Kokumai. “I love fashion. I would love to explore more of it. What I did today was so much fun! I didn’t look as confident as I did in karate, but inside I was so excited!”