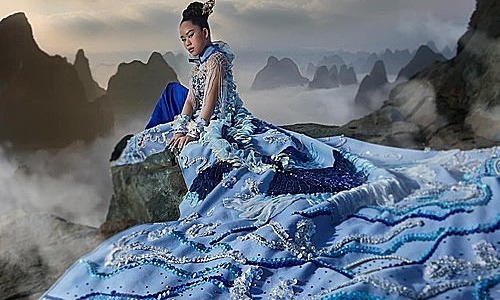 After greatly admiring the “Tropical” series of photos taken by young model Tin Tam with pythons, parrots and other animals, she became associated with publications such as Prestige Models Magazine (USA), FABUK Magazine (UK) and the I Do Magazine (Thailand). promote the ao dai.

She has been collaborating with MMMagazine since 2020. The US publication has featured images of Phuong Ho’s design on its front page 20 times, according to the local newspaper Tuoi Tre.

The Ao Dai that Bella is wearing is 3.5m long and has intricate handcrafted details. The front features dragons amid clouds, while the reverse features a stunning sinuous fishtail pattern. The outfit weighs almost 30kg.