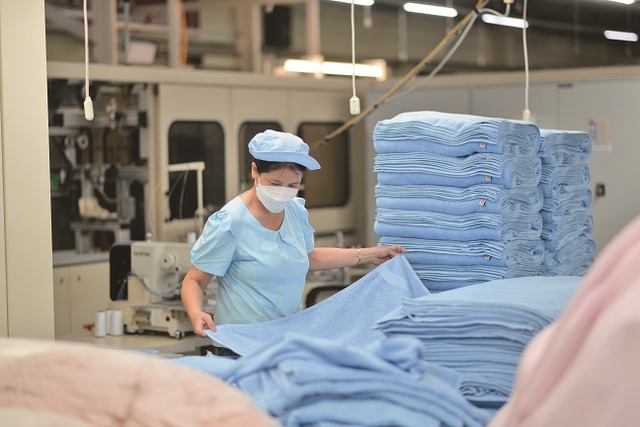 HÀ NỘI Việt Nam’s textile and garment industry is still on track to meet its export target of US$42-43 billion this year, although the industry faced many difficulties in the second half of the year.

Vũ Đức Giang, chairman of the Việt Nam Textile and Apparel Association (VITAS), said so at the press conference on the business results of the textile industry in the first six months of the year, held in Hà Nội on Thursday.

According to VITAS, 2022 is the year when companies in the textile and apparel industry gradually recover after two years of being severely affected by the COVID-19 pandemic.

Meanwhile, the total import value of raw materials and accessories for textiles and apparel was estimated at US$13.4 billion in the first six months, up 9.8 percent year on year.

However, according to Giang, Việt Nam’s textile and apparel industry still faces many risks and challenges in the second half of this year, including the new strain of COVID-19 that is still present.

Many markets that are major trading partners of Việt Nam, such as mainland China, Japan and Taiwan, are still applying strict pandemic prevention measures. This has a significant impact on the supply chain of raw materials and accessories as well as the consumption of textile products made in Việt Nam.

In addition, the high inflation in Việt Nam’s most important textile and clothing markets such as the USA and Europe, as well as the complicated development of the Russia-Ukraine conflict have led to the fact that the prices for raw materials and fuel have been rising continuously since the beginning of the year.

Specifically, the price of cotton rose by 19.1 percent; 40 percent for crude oil on the world market; 67 percent for the domestic gasoline price. In the meantime, transport costs were three times higher than the average for the last five years.

These have increased the costs of companies by around 20-25 percent.

For example, the devaluation of the euro will have a big impact on textile and clothing exports as it will increase the prices of goods as consumers in this market cut back on spending, he said.

However, Giang said that the export value of textiles and apparel is expected to reach US$20 billion to US$21 billion in the second half of the year.

In order to achieve this goal, the textile and clothing companies must quickly restructure the export markets in order not to be dependent on a few markets. They should change technology and equipment to meet the requirements of importing countries, such as EU market recycled garment requirements.

In fact, since the beginning of the year, Vietnamese textile and apparel companies have set a growth target in export, but it is important to keep the stability of export markets, employees and customers.

In general, in order to stabilize production and achieve sustainable goals in the future, companies themselves need to keep up with market trends, invest in machinery and technology, and switch to green production according to brand requirements. You also need to build staff, especially designers for the fashion industry.

Historically, VITAS has connected domestic companies with each other and with foreign-invested companies to form supply chains and expand export markets. It was also an effective bridge between state administrative agencies and textile and clothing companies.

The association will continue to accompany companies to propose recommendations and solicit support from government and ministries, sectors and communities in relation to pandemic prevention, production, market information, administrative reform and human resource development. VNS

Here is which school supplies are eligible

Europe climbs by specialty apparel market size, scope, growth opportunity, trends of manufacturers and forecast to 2029 – this is Ardee