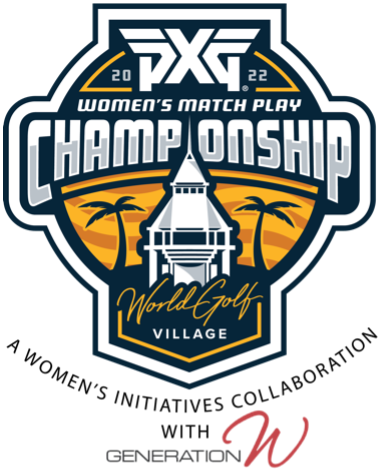 Now in its second year, PXGWMPC is a unique event in many ways. Designed specifically for pro players who don’t yet have LPGA Tour status, this is the only match-play tournament on the calendar and features one of the biggest prize pools of the season. After a two-day qualifier on November 1-2, during which the field is reduced from 90 players to 64 players, the match-play portion is then split into two parts over three days. First, these 64 players are divided into 16 “pods” of four players who play each other once in a 9-hole match.

Called The Battle Round, and in a format unique to PXGWMPC, players earn a point for each hole won (and half a point for those halved) and a bonus point for winning the game rather than advancing through the best win-loss record list. The player in each pod with the most cumulative points advances to knockout rounds, the traditional 18-hole match-play format. At $60,000, the championship also offers one of the largest total prize pools of the year for the development stage. The $15,000 champion’s check is the biggest of the season, and it’s especially significant considering the top-earning player earned $35,000 that year — not enough to cover her expenses on the competition over the course of a year cover up.

PXGWMC is now an official event of the East Coast Women’s Professional Golf Tour (ECWPGT), a newly launched women’s development tour whose dual mission is to create more accessible and better playing opportunities for women aspiring to the LPGA Tour. Headquartered in Ponte Vedra Beach, FL, the ECWPGT only launched in January and is one of only three tours in the country to either directly or indirectly feed the Epson Tour, which in turn directly feeds the LPGA Tour.

“This is professional golf at a high level, and if it’s anything like last year, it’s going to be golf drama at a high level,” said Mark D. Berman, creator of the tournament and founder of the East Coast Women’s Professional Golf Tour . Berman compared that level to Double A+ baseball and continued, “These women have all played at the most elite levels in junior, collegiate and amateur golf. Most have Epson Tour status, which is equivalent to the LPGA’s AAA level, and many have played on the LPGA Tour or have conditional LPGA Tour status and are working their way back to full-time status. Fans will know the names of these incredible players before they come to the LPGA Tour and will be able to see them up close and personal.” The ECWPGT hosted 13 events in its first year and welcomed nearly 300 players, including two players who have passed the Epson Tour to the LPGA Tour, and seven who qualified for the 2022 US Women’s Open Championshop. There are also 67 ECWPGT players remaining in the LPGA Tour Q-School, which has its second phase coming just two weeks after the PXGWMPC and is drawing many of the best players into this year’s field.

With a big purse and a big stage, Berman isn’t surprised by the strength of the field, which includes NCAA champions, ECWPGT winners, Epson Tour champions, US Women’ Open qualifiers, and players who “cashed checks at the LPGA level.” “. Some of the better known names are:

Exceptions have been accepted by the University of North Florida Senior, Christine Eisenbeiss and Senior of Flagler College, Fernanda Lacaz. Both players could turn pro after graduation. Joanne Berglung, UNF Head Women’s Golf Coach, said, “The sponsorship waivers for the PXG Women’s Match Play Championship provide an incredible opportunity for local college players to showcase their talent against the next highest level of competition. We as coaches are very excited and grateful to the Tournament Committee for stepping up and making this possible for our student-athletes.” She added, “Having the chance to take another step in building their golf career is so important to them their growth. It’s also exciting to know that we’ll get a glimpse of the game’s future stars at the pro level.” Berman said, “Most aspiring pros don’t go straight out of college into the Epson Tour or the LPGA Tour. Our tour is often the first step in their journey, so giving them a glimpse into their future and embedding the event deeper into our local community makes a lot of sense.”

The field also includes a handful of the best amateur players in the world, all just teenagers, including Rolex Junior World Number One and Alabama Commitment, Kaitlyn Schroeder from Jacksonville, Chloe Kovelesky (Boca Raton), who played at the 2021 US Women’s Open at just 14 and qualified for this year’s LPGA Portland Classic, Paris Hilinsky (Palm Beach Gardens) and recent LSU commit Jordan Fischer (North Fort Meyers), both of whom have competed in the US Women’s Amateur Championship and the US Women’s Open.

A celebration of women’s empowerment off the ropes and an equally important part of the week is the women’s empowerment collaboration with the women’s empowerment organization Generation W. All players are invited Generation W Links to the Leadership Summit presented by Circle K and Baptist Health, a full day of women’s initiatives designed by Genearaton W CEO Donna Orender just for the PXG Women’s Match Play Championship. The event takes place on November 3rd at the World Golf Village at the St. John’s County Convention Center between the Stroke Play Qualifier Tournament and the Match Play Championship.

In addition to title sponsor PXG, the tournament and field of 90 players is supported by a dedicated family of corporate partners. Back from last year are founding partners Murgado Automotive Group/Bentley & Maserati Jacksonville, Baptist Health Jacksonville and Kessler Creative. On board the 2022 event are new founding partners Access Golf of Jacksonville and St. Augustine’s Vitis Energy, the only female-led energy company in the United States. Hospitality partners include Manifest Distilling, Maestro Dobel Tequila and Murray Bros. Caddy Shack.

Daily admission tickets are only $10.00, making it affordable for the whole family to enjoy a day on the course to see dozens of rising LPGA stars. Admission includes a complimentary drink from Manifest Distilling and Maestro Dobel Tequila. Tickets are available on the tournament website at www.pxgwmpc.com where fans can purchase and print their ticket. Ticket holders check in at the main gate with their click and print ticket and receive a wristband for the day. Ticket proceeds will benefit Investing in Kids (INK!), a St. Johns County nonprofit that raises money for underserved public schools. Social media names include @PXGWMPC, #PXGWomensMatchPlay, @ECWPGT, #AintNoMiniTour and #MakeGolfYourThing

Founded by entrepreneur and self-proclaimed golf geek Bob Parsons, PXG embodies his belief that every new product – from golf clubs to sportswear – should be significantly better. Every innovation should noticeably improve your performance. And every moment of impact should add to your enjoyment. Today, PXG offers a full line of right-handed and left-handed golf clubs including drivers, fairway woods, hybrids, irons, wedges and putters, as well as performance sportswear and accessories. Visit PXG.com for more information.

The ECWPGT has the dual mission of creating more and better playing opportunities for women aiming for the LPGA Tour and creating career connections and off-rope pathways for female athletes. One of only three women’s development tours in the United States, the Florida-based ECWPGT serves the eastern portion of the country with 15 events per year and its Q-School prep events in California. Players come from 26 states and more than a dozen countries. Through the eyes of his own daughter, Mark Berman sees the limited opportunities for women to pursue their career dreams, especially when compared to their male counterparts, who lead 30+ “mini-tours” to the PGA TOUR, Mark Berman, with 25+ Years of experience in the golf industry marketing experience, the tour started in January. The ECWPGT is open to professional players, including those on the Epson Tour and the Ladies European Tours, and is also open to elite-level amateur and college players. Website www.ECWPGT.com. Follow at @ecwpgt.