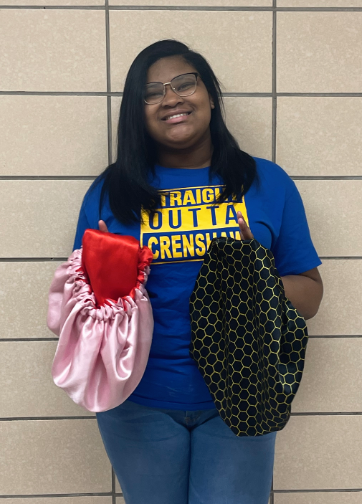 A Michigan City High School student with career aspirations in the fashion world is hoping to catch her lucky break next month, Michigan City Area Schools says. Simara Jenkins, a junior at MCHS Junior, presents her business plans to the Society of Innovators at Purdue University Northwest.

Jenkins, who plans to graduate early, was selected to compete in the Innovate WithIN Region 6 finals in April. She was selected along with 10 other teams from the Indiana Northwest from more than 400 applicants for the finals.

Innovate WithIN is a high school pitch competition hosted by Purdue University Northwest and the Society of Innovators at PNW. It allows high school students from across the state to pitch their entrepreneurial idea and collaborate with innovators to take their business from a dream to reality.

Her business, SimaraJae Creations, now has a website, TikTok followers, and an Etsy business page to sell her products. Jenkins gives a lot of credit to social media for helping start and grow her business — especially after a fellow student posted about SimaraJae on TikTok.

“She wore a pair of leggings that I made and it went viral with 50,000 views. I woke up the next morning with a ton of new views and followers,” Jenkins said. “I got about 30 orders from that one video.”

Jenkins found out about PNW’s Innovate WithIN contest through an email from MCHS Co-Principal Kyle Dean and decided to pitch her company to the experts. She likened the competition to “Shark Tank” as she described the rigorous process of creating a business plan, creating a slideshow and video, and preparing for next month’s finals.

While she is currently enrolled in the AK Smith Career Center’s Criminal Justice program, Jenkins said her pursuit of a career in law is now a backup plan. Instead, she hopes to attend the Fashion Institute of Technology in New York and become a fashion designer.

The Innovate WithIN Region 6 Finals will be held on April 18th at the PNW Hammond campus and will offer a chance to win $1,000 and advance to the state finals.

Jenkins is already eyeing the grand prize of $25,000 in corporate funding. If she wins the state’s top prize in this contest, her first goal is to buy a new sewing machine… “a nice one – and lots of fabric,” she said, “and I could move my business out of my bedroom.” ”