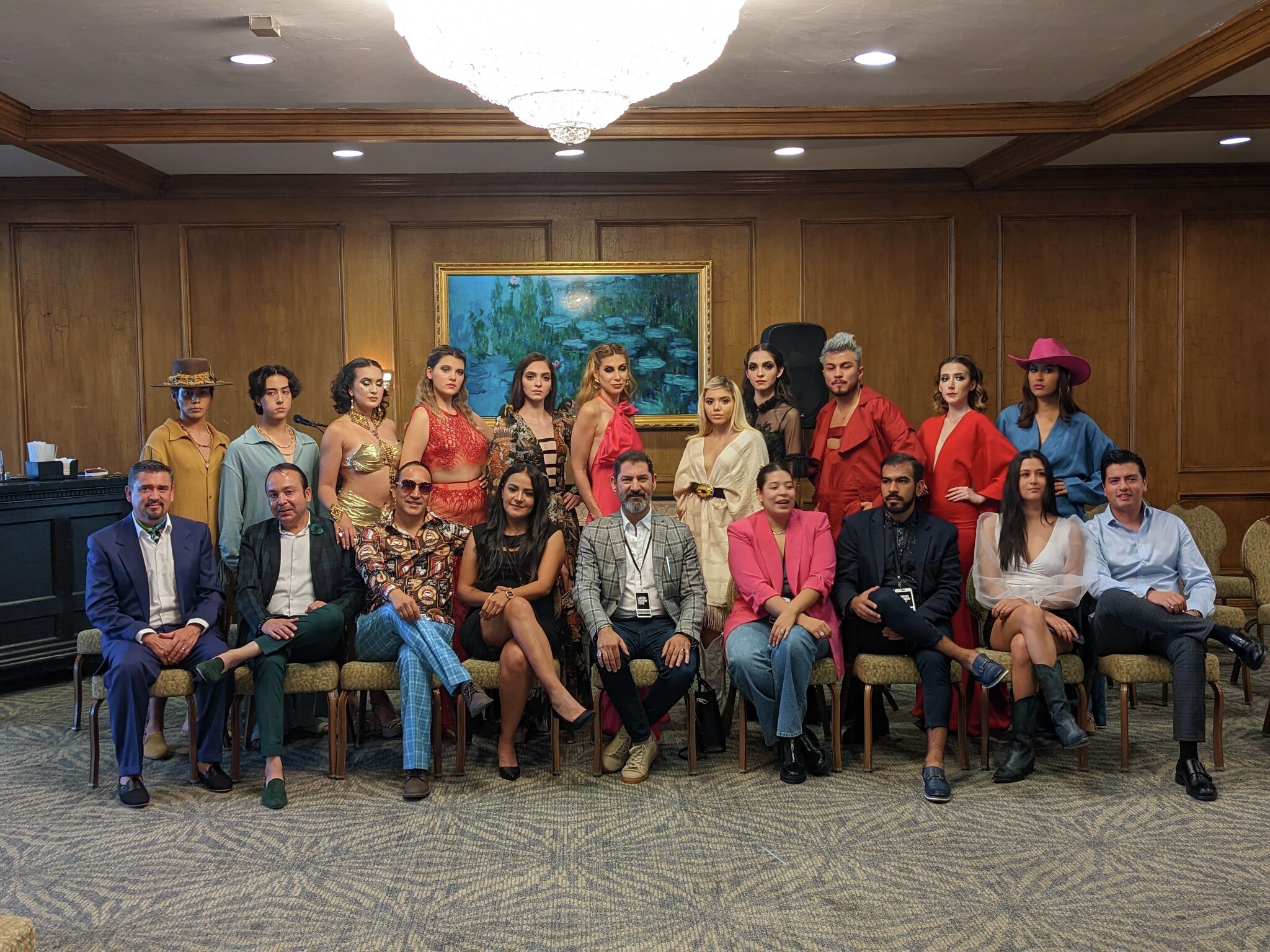 Fashion week kicked off on Friday, with a number of designers showing their clothes, all of which hail from Mexico, to show what they’ve been working on during and after the pandemic.

A total of 13 designers were present at Laredo Fashion’s Week, including everyone from young siblings to young and old men and women, and even some people who worked for their parents.

Three of the designers who stood out the most were a designer specializing in menswear, a young sibling duo who recently started their business, and a young woman who tries to ensure that a woman’s beauty is captured with the most minimal of designs comes into play.

Gabriel Honorato is the owner and fashion designer of HonoratoMX based in Guadalajara, Jalisco.

Originally from Colima, Honorato moved to Guadalajara to study the marketing aspect of the industry when he actually started developing his own styles and creating his own collections.

“My collection is very categorized by who I am as you will see a range of sweaters and other styles that are mostly monotype as many of my looks are one color only,” Honorato said. “I like having a person in there full red or full black or yellow to showcase a strong color and also with strong structure and just a solid color.

“Personally, what motivates me to do the designs I do is looking at my materials and then working with what I have. More than just the references I take as a designer, I like seeing random materials and garments and then visualizing what I can do with them, and I just like creating something of what I think that it doesn’t exist yet, and bringing it to life in 3-D for others to enjoy.”

As he began showcasing his clothes, Honorato was called by a university in Guadalajara to teach fashion design classes while rekindling his love for the industry and developing new lines of men’s clothing.

He said that although the pandemic has affected his business, he continues to work with personal models and make clothing for individuals. It ultimately helped him keep his business thriving during such a difficult time.

“My main focus is always menswear and making sure that every piece I can make is suitable for every occasion or event and that it suits every type of model,” Honorato said. “The clothes are good for any special occasion or just any trip and I also personalize clothes for men. I just want them to be different from the rest.”

Some of the youngest fashion designers were a 22-year-old sister and a 25-year-old brother, as the siblings started venturing into the world of fashion design just under a year ago.

“All the garments we feature are 100% linen and come in a variety of colors and I believe this brings a lot of life to our work,” said Maribel Galvez, co-owner of Mayorca Mexico.

Galvez said that her creative ideas come from things that she randomly thinks about on a daily basis.

“What drives me creatively are simply spontaneous ideas,” says Maribel. “When I like something or start thinking about it, I’m obsessed with it until I bring it to life.”

Maribel’s brother, who is her partner, also became interested in the brand when he saw that she had a lot of potential with her designs.

“Our company started when I saw my sister designing and I started getting involved and helping her on the business side of the brand,” said David Galvez, the other co-owner of Mayorca México. “So then about a year ago we decided to make the brand a reality and hope it’s the first year of many.

“We hope to continue to have these creative ideas to help the brand grow.”

Though it’s common for siblings to fight, Maribel said it’s always a “challenge” to work together, but she finds it works because they complement each other.

“All we have to do to make things right is know which part is his duty and which is mine, and in the end it’s a huge help to have each other’s backs,” Maribel said. “In terms of the creative aspects, sometimes you get a little scared about what you’re doing, but having someone by your side who is 100% supportive – whether it’s a brother or just someone from a team – is like that important as you can use this knowledge of the other person to advance your business and ideas.”

Presenting the beauty of a woman

Monica Armas — the owner of the company with her own name, based in Tepic, Nayarit, Mexico — said she started studying industrial design when, later in life, she suddenly became interested in the fashion industry.

Armas is someone who likes to dress well and believes that no woman can ever look ugly if she dresses well. In fact, she said that all of her designs are made according to this philosophy.

“I’m super minimalist when it comes to my style because I find that women don’t really need a lot of effort to show their beauty,” Armas said. “That’s why I dedicate myself to showcasing how they can look good with the most minimalist of styles.”

Armas said all of her collections are dedicated to the full use of Mexican products and Mexican textiles, as she believes that cotton and linen from Mexico are among the best in the world. She also said she likes how people outside of Mexico can see how beautiful clothes can be made using only 100% Mexican products.

Unlike most Mexican designers, she does not focus on the patriotic or historical side when using Mexican products, instead focusing on using Mexico’s architecture, color and geography for inspiration.

The main detail in her clothing designs was an encapsulated scorpion in the belts of all her dresses, which she believes shows the tradition engraved in the dress while presenting modernity and simplicity with the new looks.

“It doesn’t take much for a woman to show her beauty because a simple great cut, texture in the clothes and a good face with confidence, not beauty, then the woman can fully show who she is,” she said. “That alone makes every woman special.”

What fashion designers wanted to achieve in Laredo

All the fashion designers hoped the event would allow them to showcase their pieces and many of them brought their work back to see as the pandemic severely impacted what they offer.

“This event really helped me to show once again what I’ve done and bring it back into the light,” Honorato said.

David Galvez said his main intention of being part of the runway show is “to allow the brand to get exposure and position itself in the industry, and also to network with other fashion designers and brands that they hope will maybe one day they could work with them.” He said he doesn’t see the conglomerate of so many designers as a competition, but as a place where they can complement and work together, and hopes young fashion designers will all come together to create to work together.

With their designs, Armas simply wanted to show what Mexico is all about.

“I know there are a lot of Mexicans here in Laredo or Mexican-Americans, and I want to show them that as Mexicans living in Mexico, we can convey through clothing what Mexico is and what lives in the country through these designs,” Armas said .

Laredo Fashion Week kicked off on Friday 19th August ahead of the Designers Fashion Show which was held on 20th August. The models who were part of the show were from the Avanti Modeling School and Agency, while 13 international fashion designers presented their work, which also presented their models. The 13 fashion designers are in town to present their latest collection on the catwalk.

There were three separate shows for the Saturday runway show: the Kids Designers; Ready-to-wear designers and haute couture designer runway shows. Each show hosted separate designers per category and were separated by time slots.