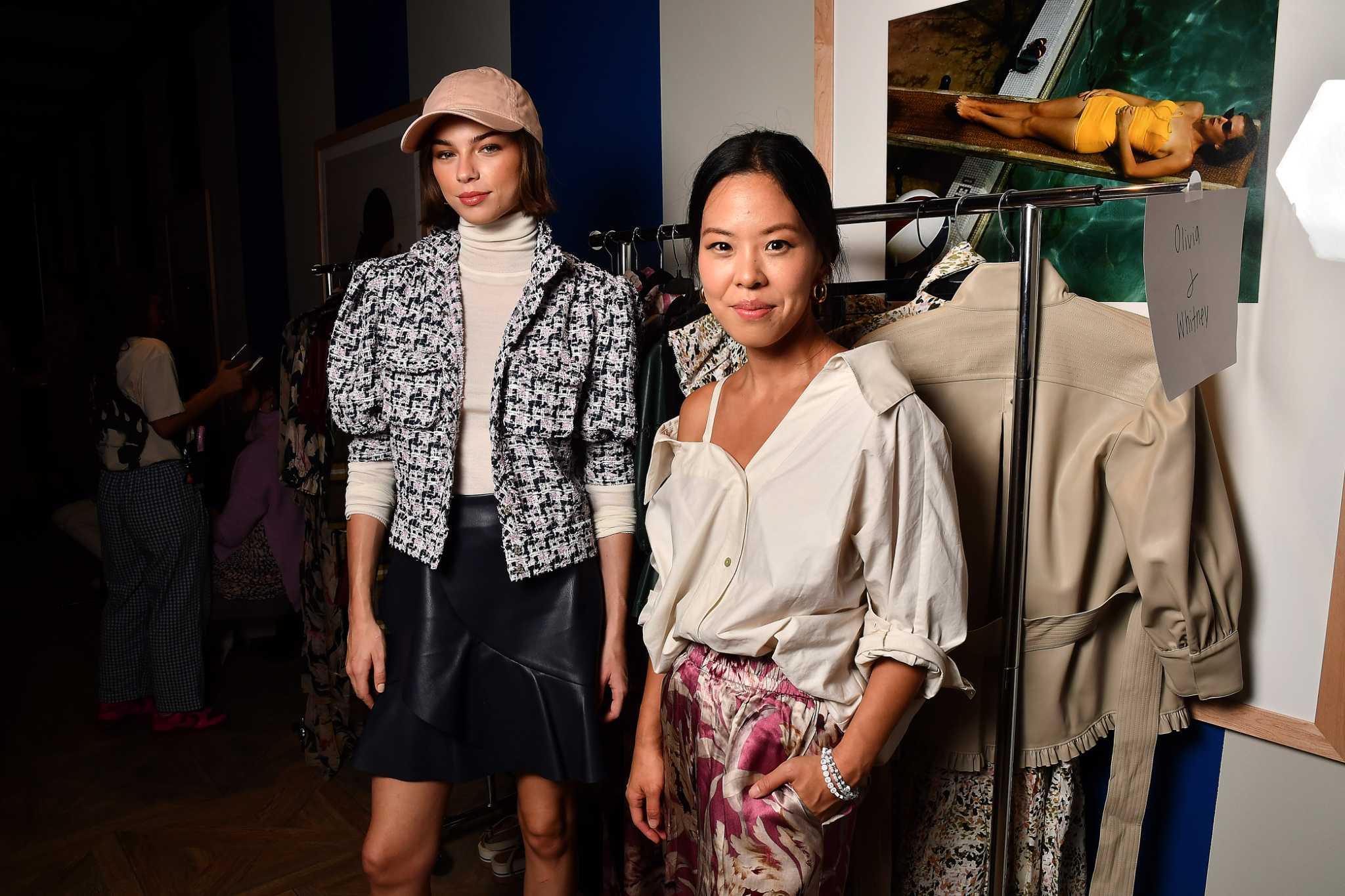 When fashion designer Christy Lynn presented her Fall/Winter 2022 collection at Hotel ZaZa Memorial City, temperatures were fluctuating well over 90 degrees. With any luck, that won’t be the case in a few months, when Houston’s fashionistas swap their bathing suits and sundresses for transitional pieces to transition into fall. Or start planning your wardrobe for holidays and winter travel.

The latter need represents a large part of Lynn’s client base and inspiration. Women come to her for travel outfits and she, in turn, is often influenced by wonders seen abroad.

“This fall collection is based on architect Zaha Hadid’s iconic Dongdaemun Design Plaza in South Korea,” says Lynn. “She built this huge square right in the heart of Seoul and is looking to the future. And she is female.”

Flowery prints are part of her signature. The leather skirts and jackets are eye-catchers in bone and dark green tones.

She’s still finding out exactly who Christy Lynn’s customer is and what she’s shopping for. At first, Lynn thought her clients were mostly in the ultra-feminine look market. But since she opened an independent studio in Montrose’s Avondale neighborhood, a new demographic has emerged.

“There’s a huge age range from 35 to 70 for women who are lawyers or in finance who come to me for nice blouses to wear under blazers,” she explains. “The women who have more time during the day to go to events buy the flowing dresses.”

Houston has a sizable group of ladies who have lunch in addition to the gala set. Adding black tie dresses is a natural next step.

“I’d like to expand the collection to include more evenings,” Lynn hints. “I love special things like Italian and French lace.”

Recently she has been dealing with French fashion. She visited Paris in the summer and plans to return twice a year for an international project that is still secret.

Before Lynn opened a store in Houston, she spent several years on the East Coast. A career-defining stint in Manhattan also helped share her personal style.

“I like to look neat and chic, I’m a city girl at heart,” she says. “Texas women are a bit more sophisticated, the shoes are on point here. Maybe that’s because in New York we walk in sneakers and flats. Here they can drive so that they can wear the perfect shoes with the outfit. And Texas women are not afraid of color.”

After graduating from the Rhode Island School of Design, Lynn worked for Nanette Lepore as an assistant designer on beads and embroidery, and for Elie Tahari, where she honed her tailoring and suiting skills. She also spent five years with Catherine Malandrino, who became her mentor.

Launching a clothing line in New York felt daunting; in Houston the idea seemed much more feasible. What started out as a small capsule for Lynn’s own wedding looks – engagement party, bridal portraits, etc. – was a hit when she bought the pieces at the wholesale market.

“After that, everything just snowballed,” she says. “Leah (Hale) at Tootsies was the first to buy my collection. They have been on board since day one.”

The Texas women’s boutique near River Oaks will continue to carry Lynn’s pieces next season. Visitors to her show at Hotel ZaZa were able to shop on-site via QR code, but there’s still the old school: at her historic ‘Zuhause’ studio in Montrose.

The Academy Apologizes to Sacheen Littlefeather for Her Treatment at the 1973 Oscars: NPR

As inflation continues, parents are scrambling to score back-to-school deals without breaking the bank