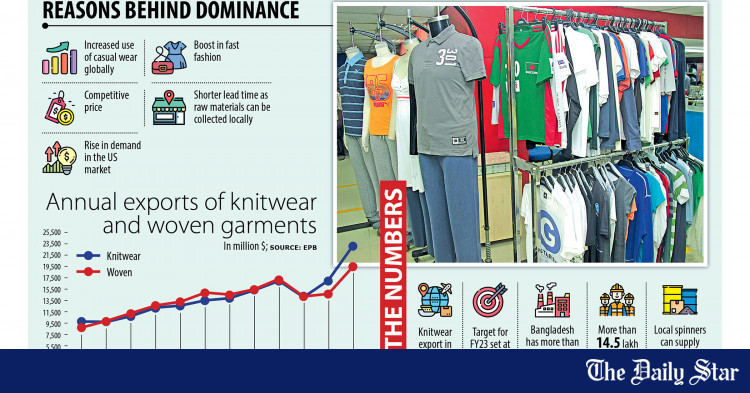 The knitwear segment has maintained its position as the country’s largest exporter in the ready-made garment industry and among all sectors of Bangladesh.

But the journey was not smooth.

For all the latest news, follow The Daily Star’s Google News channel.

In the early years it had to navigate a quota system and securing raw materials was not easy as imports were the only option. Now it faces growing challenges caused by the coronavirus pandemic and the Russian war in Ukraine.

The knitwear segment overtook the woven subsector for the first time in the 2007/08 financial year and held pole position until 2010/11.

Weaving overtook the knitwear segment in 2011-12 and the dominance lasted through 2019-20.

In 2020-21, knitwear overtook weaving and reclaimed glory. And it continued into its most recent fiscal year, bringing home $23.21 billion, versus $19.40 billion for weaving.

Even from July to September, the first quarter of the current fiscal year, when total export earnings showed a declining trend, the knitwear segment grew 9.40 percent year-on-year to $5.64 billion on strong demand amid raging war and unprecedented inflation in the euro zone and the USA.

Local clothing suppliers primarily attributed the global shift in fashion and style to the continued success of the knitwear sector.

Fast fashion and casual dressing have increased the use of knitwear over the past decade. Today, even executives wear casual rather than formal attire in the office. Knitwear, like functional sportswear, is used as formal wear around the world.

Fashion connoisseurs prefer knitwear, as it is comfortable and easy to wash. In addition, product diversification has taken place within the segment.

As Covid-19 brought the entire world to a standstill, severely damaging the global supply chain and businesses hit rock bottom, the country’s knitwear sector surprisingly put on a good show as Bangladesh continued to supply garments to the world despite the raging flu.

The segment also felt some damage.

The slowdown in knitwear shipments was first noticed in March 2020, when revenue was a meager $1.05 billion. In April, it fell further to $180.2 million.

But it rebounded the following month when exporters raked in $608.38 million as people were forced to spend more time indoors to avoid catching the deadly virus. Revenue sprinted to $1.16 billion in June.

“It was surprising that the demand for knitwear started to increase even during Covid-19 when the global supply chain ground to a halt. In fact, knitwear export has continued to increase,” said Md Fazlul Hoque, Managing Director of Plummy Fashions, a knitwear exporter from Narayanganj.

“The use of knitwear has increased as consumers spend more time at home. Western consumers mainly use T-shirts during their long stay indoors.”

Historically, the knitwear sector in Bangladesh was nurtured due to the quota system that was introduced in the late 1970s and was in effect until 2004.

In the early days, knitwear manufacturers, especially those based in Narayanganj, shipped knitwear as the European Union allowed the possibility of a quota system that was not strict and less cumbersome. Thus, a strong market for local knitwear was created.

In fact, Bangladesh made the best of the quota system and laid the foundations for today’s gargantuan knitwear industry.

The EU and other developing and developed countries later relaxed rules of origin for knitwear, allowing least developed countries such as Bangladesh to qualify for the trading bloc’s generalized preference system, even if imported cotton and yarn are used for export-oriented goods.

This prompted knitwear manufacturers to invest heavily in the sector and expand their manufacturing capabilities.

Subsequently, entrepreneurs also pumped money to produce yarn and other raw materials for the knitwear industry.

Currently, nearly 90 percent of raw materials are sourced locally, reducing dependence on China, a major achievement for the industry as lead time has been more than halved.

Just five years ago, the US was not an important market for knitwear manufacturers.

“Today, the US has become an important export destination for us,” said Hoque.

Three years ago, knitwear exports from his factory to the US were close to zero, while the world’s largest economy is now his main buyer.

Mohammad Hatem, executive president of the Bangladesh Knitwear Manufacturers and Exporters Association, said demand for knitwear has not fallen despite higher inflation in the euro zone and the US.

Competitive prices are a key factor in Bangladesh’s success in the knitwear sector.

“The export of knitwear has continued to increase and the momentum will continue in the future,” said Hatem.

Faruque Hassan, president of the Bangladesh Garment Manufacturers and Exporters Association, expects the export dominance of knitwear to continue in the next few years as raw materials are easy to source and the demand for casual wear has increased demand for knitwear.

There are currently more than 1,200 knitwear factories operating in Bangladesh, employing over 14.50,000 workers.

The Artisan donates his whale tail clothing line to OCEANA