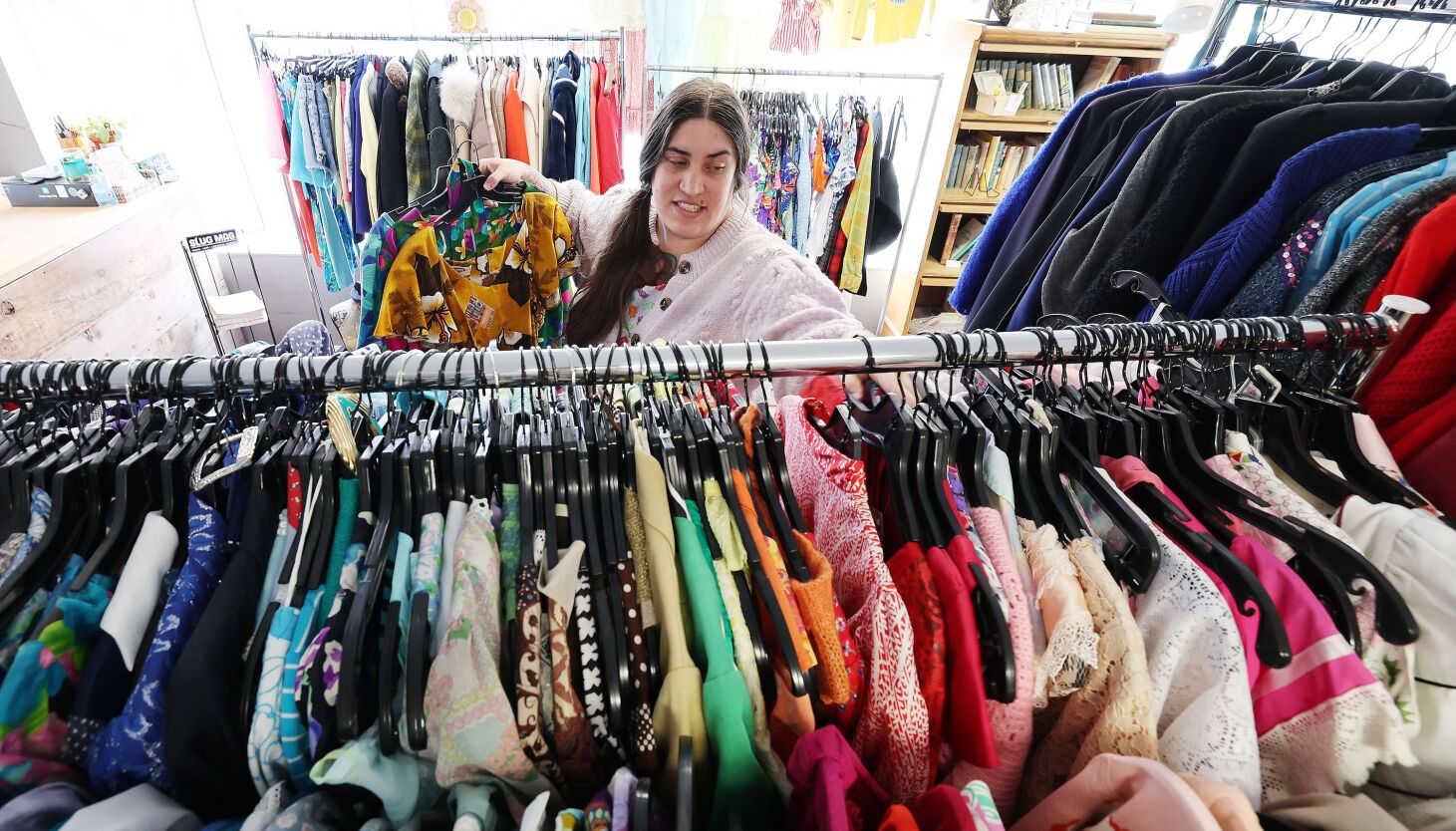 Is vintage clothing better than buying new? Upcycling is a fashion trend

The latest fashion trends are nothing new at all.

Utahns are buying more used clothing from bygone eras in greater numbers to be environmentally sustainable, financially sensible and to differentiate themselves in the age of big-box fashion.

“It’s cheaper, better quality and much more unique. Nobody’s going to wear that dress to the concert you’re going to,” said Jacqueline Whitmore, owner of Copperhive Vintage, twirling a 1960s floral-print floor-length dress. “This dress is 60 years old and still looks amazing. People are starting to get it.”

Whitmore, whose Copperhive caters to a midcentury aesthetic with bold floral prints and form-fitting dresses, is among a growing group of vintage retailers that have helped make the Beehive State a destination for thrift.

In recent years, second-hand has become the number one priority for more and more buyers turning to vintage dealers as supply chain issues and the economic uncertainty of the COVID-19 pandemic made buying virgin less attractive. Now retailers believe the new customers are here to stay.

“I saw a lot more first time customers. When they can’t find what they want at Nordstrom, or their order takes too long to deliver, they come here to shop for wedding wear, special occasion wear, and even younger shoppers looking for prom outfits,” said Whitmore, who found her way to vintage as a plus-size person looking for fashion to match.

Pandemic fall storms notwithstanding, vintage has been on the rise for nearly a decade, fueled largely by a new generation of eco-conscious shoppers who say buying second-hand — dubbed “upcycling” — is a crucial tool in the fight against climate change , and the most immediate way to keep a shady fast fashion industry in check.

“I feel better in my soul when I’m wearing something that doesn’t disturb the environment as much. Buying used is a drop in the bucket, but it’s something I have control over,” said Taylor Litwin, a stewardship director for the Cottonwood Canyons Foundation, who tries to buy only used. “It’s obvious how much pollution we create, so I’ll try if I can somehow reduce it.”

According to research cited in outlets such as Bloomberg Business and the Columbia Climate School, the current fashion industry is “responsible for 10% of man-made greenhouse gas emissions and 20% of the world’s wastewater, and uses more energy than the aviation and shipping sectors combined.”

“It’s amazing considering how much water it takes to make one pair of denim. Added to this are the emissions from shipping textiles around the world. Because of this, many of our younger customers are pushing for sustainability,” said Whitmore, the owner of Copperhive.

Popular new platforms like Display Copy are springing up to promote vintage as a way to “protect and express yourself without causing further harm to our planet”.

And now even mainstream fashion brands are starting to join the upcycle movement, including Levi’s Secondhand, the jeans giant’s new program that buys back used clothing to reuse and resell.

Though commitments like the Fashion Industry Charter for Climate Action suggest big players are ready to reform going forward, many consumers are trying to mitigate the impact by looking to the past — and they find plenty to work with in Utah be able.

Utah is “full of vintage”

In a converted historic bungalow at 1100 East in Sugar House, a thrift store called Rewind specializes in fashion from the 1990s and 2000s — with items like chunky Carhartt work coats and cozy, shrunken flannels — that harken back to a mostly millennial era Clienting may or may not have been when the styles debuted.

The late 20th century is currently the dominant fashion in the used clothing market in Utah, and it’s a trend that Rewind owner Edgar Gerardo saw ahead of the curve.

Gerardo, who immigrated to Los Angeles with his family as a child, said he developed an eye for vintage trends out of necessity. As a Mexican immigrant in LA, sourcing and selling used items was one of the few ways he made money, he said.

“No one would hire you if you were an immigrant in LA in the ’90s. That was the only thing our family could buy and sell at flea markets. Little by little we learned what is popular, what sells. It’s a normal immigrant story,” he said.

When the economy collapsed in 2008, he moved to Utah with his family, where he initially planned to earn a living with “regular jobs”. But then he discovered an untapped treasure trove of thrift.

“I didn’t know this place was full of vintage. And no one was picking it, so I went back to what I knew: picking vintage clothes and anything I could make money from,” Gerardo said.

At first he was part of a small group picking for resale. But that changed around 2015 when demand for vintage exploded.

“In the beginning it was me and maybe three other guys. Now you go to a Deseret Industries or a Savers or one of the thrift stores in town and it’s full of kids trying to choose clothes for resale. It’s caused prices to go up everywhere,” he said.

Gerardo says the current milieu for upcycled clothing began in the Japanese and British subcultures, which gained attention in the States around 2015. After that, vintage found the support of prominent influencers and the trend took off across the country.

An example of the influence of influencers is the market for band shirts, which began to appear on high-profile social media accounts around 2015. A celebrity endorsement boosted demand for wearable merchandise from music groups like Metallica, a 1980s metal group whose T-shirts Gerardo has sold for up to $500.

“One would imagine that things like that aren’t worth much, but then a celebrity or an influencer wears it and the costs skyrocket,” he said.

For this reason, Gerardo is suspicious of those who say they buy used for environmental reasons, believing the phenomenon is primarily about fundamental consumer trends.

There has been a surge in vintage-inspired social media accounts in recent years. But Utah’s thrift scene says this new generation of influencers is part of an ecosystem that operates on distinct principles that emphasizes community while celebrating individual expression.

Hannah Ruth Zander is an aspiring influencer from Utah who is promoting the vintage industry through her popular Instagram account, where she curates unique outfits spanning the styles of different eras.

“I describe it as 1960s fashion meets modern with a touch of 18th century fashion. It’s super old, then a little bit newer, and then super new. I like the collaboration of these different eras,” she said.

Zander says influencers are playing an important role in encouraging a return to individual expression that has flattened out in the stressful pandemic.

“During the pandemic, people really only wore athleisure. I think most people don’t want to look at any other jogging pants at the end of the day,” says Zander. “Now that people can finally go out with their friends and wear cute outfits, vintage is a great way to express their personality.”

Zander says vintage has become particularly relevant alongside the wider acceptance of maximalism in the fashion world, an exuberant aesthetic characterized by clashing patterns and loud colors, and a pendulum swing from the muted way of dressing during lockdown.

As well as promoting individual empowerment, Zander, who works as a stylist for small businesses and independent retailers, sees her influencer role as a crucial part of the second-hand commonwealth.

She describes the vintage community as a mutually supportive ecosystem where players “sponsor” each other by exchanging services and sharing products for events and other causes.

“Many vintage stores in Utah share their posts and help each other promote, even though they are technically rivals in the retail world. They will even do markets together,” said Zander.

“Big companies are so focused on beating each other and doing whatever it takes to take out their rivals,” she said. “But in the vintage community, people go hand in hand. It’s pretty wonderful.”

A hand-in-hand dynamic is evident elsewhere in the vintage market in a “buy-sell-bargain” model favored by some retailers.

Shoppers can exchange clothes for cash or store credit at Pibs Exchange, a second-hand retailer that stocks every style from the last half-century.

“I love swapping in my clothes and finding something new. That’s my MO,” says Miranda Lewin, who has been buying second-hand for eight years and prefers to swap rather than buy. “I like it because I get such interesting pieces that I then tailor to the aesthetic I’m going for at the time.”

The famed durability of older garments makes it possible to keep them rotating in places like Pibs. But it also has to do with the culture of bargain hunters who buy items knowing they may not be their last owners.

Lewin, who is an active musician with Utah-based band The Mskings, likes to stop by Pibs before shows to shop for stage-ready outfits.

“Fashion is a huge part of how we express ourselves and a huge part of the impressions we make, especially in terms of first interactions,” said Lewin, who as a musician has learned to appreciate the power of first impressions. “And if I realize I haven’t worn something for a few months or a year, I don’t have to keep it. Then I try to turn it around.”

But more than a one-of-a-kind look, Lewin and others say vintage clothing and the path to reuse also speak to intangible value.

“You look at a jacket right there, and it’s literally from someone’s grandma’s closet. It could be 50 years old,” Lewin said, alluding to a suede number with a huge shearling collar. “This stuff has its own history and character. And when you embrace something like that, it becomes part of your character while you add even more to it. You can take something old and make it completely new.”