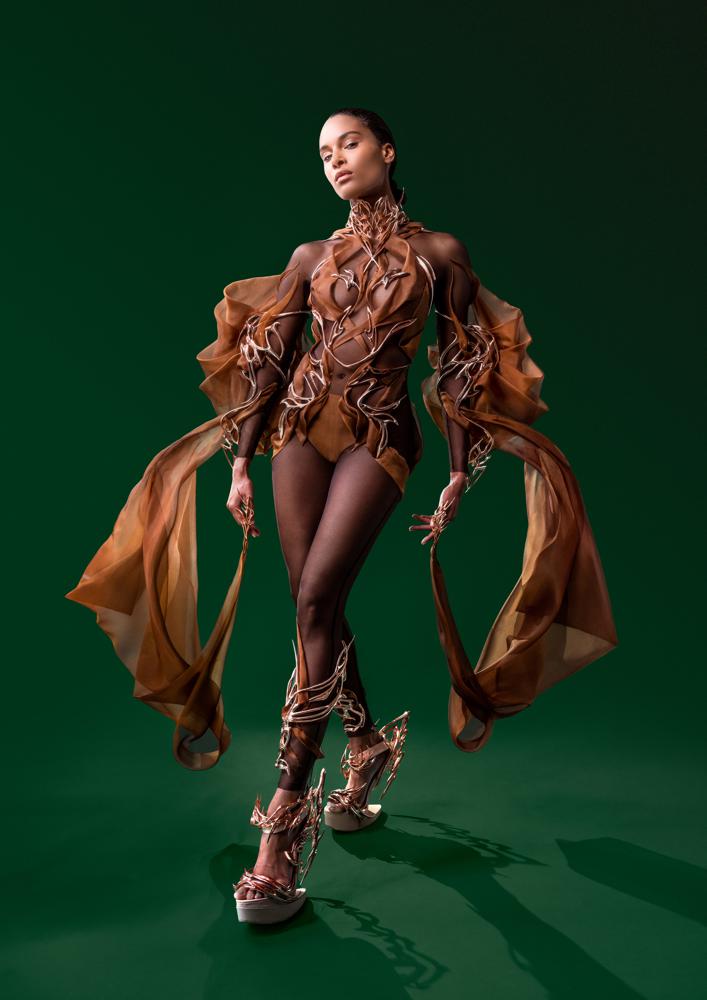 Designed and manufactured using 3D printing, the dress was unveiled on Monday during Paris Fashion Week to showcase the “decadence of plant-based delights” alongside circular fashion.

The design is a celebration of the vegan Magnum range, which features sustainable materials and is said to be the first haute couture dress to be made from cocoa bean shells.

Van Herpen has been at the forefront of combining 3D printing and digital manufacturing techniques with haute couture fashion design for over a decade. The designer has an extensive body of work integrating 3D printing and other technologies, starting with her 3D printed top Crystalization in 2010.

Since then, van Herpen has designed 3D printed fashion pieces for famous celebrities like Bjork, Beyonce and Lady Gaga, and has also worked with the likes Stratasys and Materialize to realize their designs.

A 3D printing technology that is at the heart of a number of van Herpen’s designs is a ‘foliage’ manufacturing technique developed in collaboration with TU Delftand in 2019, the two presented their 3D printed “Cellchemy” face jewelry at the Musee des Beaux Arts.

Fusion of cocoa and haute couture

Hailed as “the first of its kind”, the Magnum Vegan Haute Couture dress was designed and manufactured using intricate 3D design and SLS additive manufacturing technology. The dress features sustainable materials that mirror the vegan ingredients in Magnum’s ice cream, including cocoa bean shells that have been processed into a fully organic and 3D printable biopolymer material.

The dress features intricate details such as plant-like copper-plated body adornments coated and intertwined with upcycled organza, among other 3D-printed elements.

“I’m honored to have been approached by Magnum Ice Cream as a partner to bring the Magnum Vegan Dress to life,” said van Herpen. “As a designer, I’ve always worked to push the boundaries of design and this collaboration has really allowed us to take it a step further by merging the ingredients of an iconic Magnum Vegan into an haute couture design.

“Having the opportunity to work with the brand on such an innovation in sustainable fashion has been a very special experience.”

The Magnum Vegan Dress is part of van Herpen’s 15th anniversary collection entitled ‘Meta Morphism’ which aims to explore society’s embrace and acceptance of a ‘new world of digitalism’ with the arrival of the Metaverse.

From Magnum’s point of view, the partnership with van Herpen marks the brand’s first step towards a broader push towards circular economy in the fashion industry, while underscoring its long-term commitment to improving sustainability in the industry. Dubbed a “dynamic collision between ice cream and haute couture”, the project aimed to support both the brand and van Herpen’s desire to create a fully sustainable production chain within the fashion industry.

“What an honor to be able to present the Magnum Vegan Dress to the world – and to do so at Iris’ 15th anniversary show makes it even more special,” said Cindy Bruna, who modeled the dress during Paris Fashion Week.

“It’s so exciting to bring ice cream and haute couture together in such an unexpected and impactful way, making this a partnership I’m thrilled to be a part of.”

Looking for a career in additive manufacturing? Visit 3D print jobs for a variety of roles in the industry.

According to Global Market Insights Inc., the industrial protective fabrics market is projected to surpass $8.40 billion by 2028.