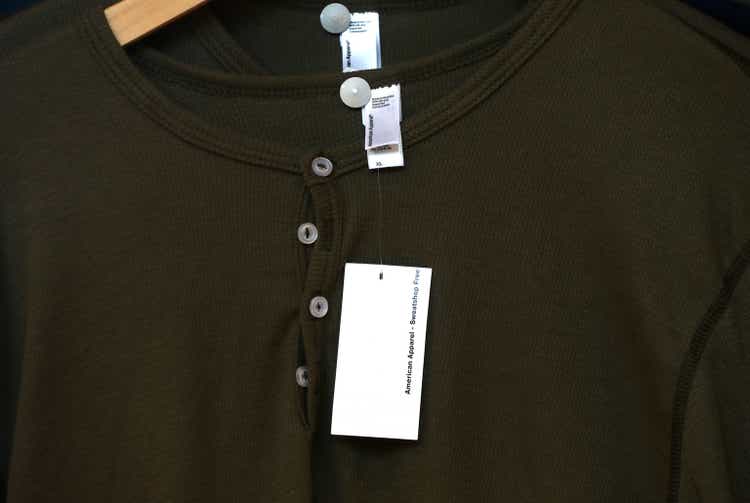 Gildan Activewear (NYSE: Gil) is not that well known for a company, despite millions of consumers using its products. The reason for this is that most of its products are sold using other companies’ trademarks, such as: as Nike (NKE), Fanatics, etc. While Gildan owns some of its own brands, such as Gildan and American Apparel, which it bought after it went bankrupt, the majority of its sales are to private label and third-party brands. This allows the company to operate on a large scale without taking any fashion risk.

Gildan has been successful in the tough apparel industry thanks to a number of factors including low production costs thanks to high operational efficiencies, superior product innovation and emphasizing its leadership in sustainability as a competitive differentiator.

In general, Gildan’s revenue has grown rapidly, with the exception of the pandemic period, when sales dropped significantly.

The company generates relatively decent profit margins even though the apparel industry is a tough one. Most impressive was its recent operating margin of over 20%.

The improved margins have resulted in very attractive returns on invested capital, now well over 20%, that even some tech companies would envy.

The slide below summarizes some of the company’s key financial metrics, particularly note how the company has benefited greatly from operational leverage. Although net sales grew at only about a 2% CAGR, operating income grew at a very respectable about 9% CAGR, and earnings per share, which benefit from share buybacks, grew even faster at about a 12% CAGR. The company generates a good amount of free cash flow, much of which it uses for share buybacks and dividends.

The company divides its historical growth into distinct phases, with the most recent period being a period of lower net sales growth and a more focused focus on simplifying the business after a period of acquisition-driven growth.

Going forward, the company expects its core distributor markets and national accounts to grow in the mid to high single digits. The company would then only need to gain a modest market share to increase sales in the low double-digit percentage range.

The company’s balance sheet is currently under-leveraged with a debt to EBITDA ratio of less than 1x. This should allow the company to continue aggressive share buybacks going forward. We prefer the company not to be too aggressive and hopefully it won’t take more than 2x leverage.

In any case, the company is on solid ground with an Altman Z-Score well above 3.0 and is therefore not at risk of insolvency in the short or medium term.

We believe stocks are a strong buy given the cheap valuation multiples they are trading at. For example, EV/EBITDA is less than 8x and this is a company with a long history of profitability. It’s only been briefly interrupted by the pandemic in the last decade, but in normal times it’s a very profitable business.

We get the same picture when we look at the price-to-earnings ratio, which is ~9x for both the trailing twelve-month and the forward ratio. We don’t have to do discounted cash flow analysis to say that a quality company like this, trading at less than a 10x multiple, is undervalued.

Some investors might be a little disappointed that the dividend isn’t higher, but when you look at the combined net distribution yield, which includes both dividends and net share buybacks, the shares are actually yielding a very attractive ~10.6%.

One of the things we like most about Gildan is that it is run in a very sustainable way and as a result has won many ESG awards e.g. B. being ranked as one of the 100 most sustainable companies in the world by the prestigious Corporate Knights. It entered the list in 2022 at position #79. It is also part of other major sustainability indices such as the Dow Jones Sustainability Index.

The apparel industry is an extremely competitive industry, and the main risk we see is that if the company loses operational excellence, it could go from making money to losing money very quickly. The company’s competitive advantage is being a low-cost producer through economies of scale and operational excellence, if it were to lose either, its profitability could be seriously affected. The company also wins significant orders thanks to its commitment to sustainability. If the company loses its sustainability credentials, it could jeopardize many businesses.

Gildan Activewear is a sustainability champion operating in the tough apparel industry but with a range of competitive advantages. The company has delivered attractive earnings, growth and shareholder returns while being one of the most sustainable in its industry. The shares are currently trading at a very attractive valuation of around 9 times forward earnings and we think investors should give them serious consideration. There are some risks to consider, but overall we see a solid balance sheet and company.