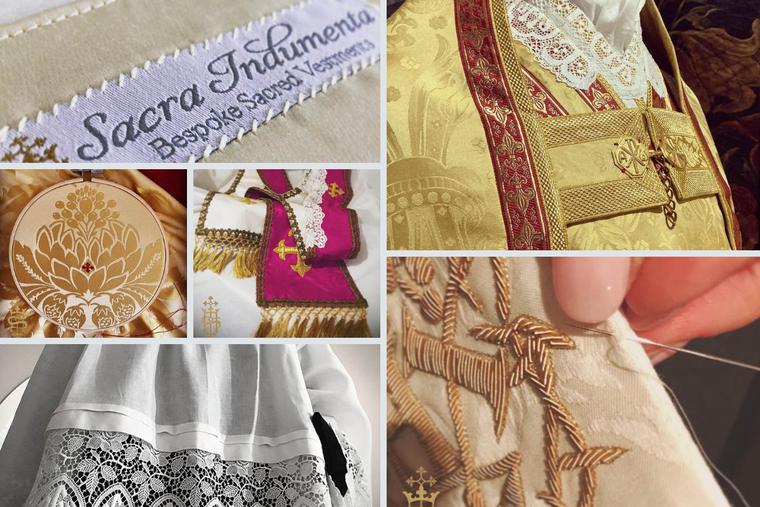 NORWALK, Connecticut — Archbishop Salvatore Cordileone of San Francisco and Father Paul Murphy of Darien, Connecticut share a lineage. At the solemn papal Mass for the feast of Saint Junípero Serra at Mission Dolores in San Francisco on July 1, Archbishop Cordileone donned the papal alb, specially designed and tailored for the occasion by Susan-Jayne Caballero, founder of Sacra Indumenta became Norwalk, Connecticut. Put on new rose robes on the last Gaudete and latare On Sundays in Darien, the town next to Norwalk, Father Murphy donned the chasuble commissioned by the same designer-tailor.

In Darien, St Thomas More Church did not have rose robes for the two Sundays of the year when this liturgical color is used. When a family offered to donate them, the church commissioned Sacra Indumenta. The result: a 13-piece mess set, including dalmatics (the tunics worn by deacons) and a chalice veil.

“Working on this project was the most fun for me. Joy was infused because of the color and purpose Gaudete and latare Sundays,” Caballero said.

“…Being a designer is a calling…” –Susan-Jayne Caballero, the founder of Sacra Indumenta, shares her work making liturgical vestments… pic.twitter.com/MXA7CyfIPm

Just 50 miles separates Norwalk from the fashion design world in New York City, but it’s a world away from the kind of design tailoring Caballero once did for Ralph Lauren, Diane Von Furstenberg, and Tommy Hilfiger, where she was vice president, eventually leading teams of designers and artists. But today, with Sacra Indumenta, she sees a connection — even to how she converted to Catholicism on her fashion journey.

A graduate of the Fashion Institute of Technology with a BFA in tailoring specialization, a specific type of fashion designer, Caballero continued her tailoring education at ESMOD, a private school in Paris. Then came a 15-year collaboration with Ralph Lauren, “an extremely long time for the fashion industry,” she recalled to the register. “She gave me everything that I use today, from a love of antiquity to attention to detail to consummate tailoring.”

Her work provided Caballero with the opportunity to travel the world, “to have the benefit of visiting vintage flea markets across Europe and being inspired by the crafts of yesteryear, beautiful embroidery, magnificent sewing techniques, construction qualities of fabrics, woven prints, etc . It was such an education because everything we designed was inspired by the great things of the past, museum pieces.”

She continued, “And there is the synergy with sacred vestments because there is no separation between what is classically inspired by the sacred vestments art. All the liturgical arts, each and every one of them, stands at the highest point of the connection of what we have here on earth as the best we have, the humblest sacrifice to God who gives us far more than we could ever give him . The pursuit of beauty—beautiful lines, beautiful fabrics, beautiful execution, durable modern heirlooms—is integral to what sacred garments are. I just didn’t know then. But there was a foundation that God gave me in my first job.”

Further foundations for what would become Sacra Indumenta were unwittingly laid at Paris vintage markets as well, where she recalls seeing many “dilapidated sacred vestments”. It always tugged at my heart. I wasn’t catholic. I was an extremely devout, very traditional Lutheran, where robes played a role, but not to the extent that they do in the Catholic Church.” Paris was also another vote of confidence for this fashion designer: in Europe, she was “Cathedrals beyond me wildest imaginations that looked even larger and more decorated than St. Patrick’s Cathedral. I just couldn’t imagine it because I’d been in New York for so long.” In Paris, she visited the Sacre-Coeur, Notre Dame, and many other great Catholic buildings. “I just got on my knees and my conversion definitely started in Europe in some of these churches,” she said.

“The awakening began. It was a long road before I actually “crossed the Tiber” and became a Catholic. But basically, God attracted me through beauty and through beauty in liturgical art.”

Back in New York City, she met her future husband, Heitor, the music director of a Lutheran church.

“We fell in love with the church,” Caballero said. “He was a Catholic, but apostatized from the church” back then, before his about-face. Seeing the “beauty of the Church” shaping the life of her children in the Catholic school and the life of her husband, “she ran out of excuses for not crossing the Tiber Come back home to church.” That was in 2012. Their marriage was later confirmed in the Catholic Church.

The stage was set for a change. Five years ago, with an unexpected blessed birth later in life, when daughter Cecilia joined brother Sebastian and sister Sofia, Caballero recalled her distinctiveness: “While I have this amazing third chance to raise a child, I will choose my family career first .”

By this time, her son had begun leading mass at St. Augustine Cathedral in Bridgeport, Connecticut, where Heitor was now the head of church music. Consequently, she made her son’s cassock and surplice “because I loved sacred vestments,” a love that had “grown stronger since I became a Catholic in 2012.”

At the same time, Caballero felt “this call to do something beautiful, something that glorifies God.” As she prayed about it, the answer came, “I never wanted to do this the second half of my career. But God did that for me.” It was then that she started her own design and tailoring studio, Sacra Indumenta, which is Latin for “holy vestments”.

And what she does brings beauty to the liturgy with the artistry of contemporary heirloom quality bespoke ecclesiastical vestments. She designs and creates five piece and ceremonial sets, altar cloths, custom linens, liturgical accessories and gowns for receiving Baptism and Holy Communion.

Each finished item is remarkable and often unique, like the St. Thomas Becket-inspired set requested by a new priest for his ordination in May. As Caballero explained, “He wanted this martyr as inspiration for his gothic fair set.” She used vintage 1930s silk trimmings and gold accents throughout the white-and-blue silk-lined garments.

“And,” she said, “the specific cruciform designs were inspired by the mess set worn by St. Thomas Becket on the day his life was taken.”

She receives many such requests for exceptional homages in vestments to Saints, Our Lady and Our Lord, as Sacra Indumenta is such a highly specialized design source, tailoring works of liturgical art that reflect the beauty of worship and sacraments.

This sacred needlework includes server ensembles such as those made for the Institute of Christ the King Sovereign Priest across the country. A popular development is their blue cassocks with matching cape and linen shirts with cotton and English crochet lace. She also makes the pectoral cross medallions because, in addition to textiles, she has also refined trimmings in the fashion industry. In addition, Sacra Indumenta also carries out special work such as: Ferraioloa traditional cloak worn by clergymen, and hand-knotted sashes for the ends of the sash worn by prelates.

Lay people also turn to Caballero to design unique christening and first communion dresses. Couples and grandparents want to create a family heirloom like a christening gown, for example using their own vintage lace or the bride’s wedding dress. “There’s such a joy that we have — especially I personally — because the sacrament of Marriage is directly related to the sacrament of Baptism, which is directly related to First Communion, and these textiles directly tell the narrative,” Caballero said.

“As a mother and wife, what Sacra Indumenta does with the traditional First Communion dress is a special joy because of the connection with the sacraments and because it is connected to the family.” She sees this connection with another sacrament: in some countries is It is traditional, when a son is called of God to the priesthood for his first Mass, to use lace or trimmings from his mother’s wedding dress. “The delicacy of the fabric is one with the beauty,” Caballero reflected on her work, adding, “It’s form and function, art and beauty rolled into one.” Above all, her passion for restoring beauty in the mess is at the heart of each beautifully designed details in the service of Christ and His Church: “The Catholic Mass and the beauty of the Mass drew my heart to the fullness of grace in Christ. Over time, my love of the Mass has permeated even my professional career, showing me that God has the best plan for our talents.”