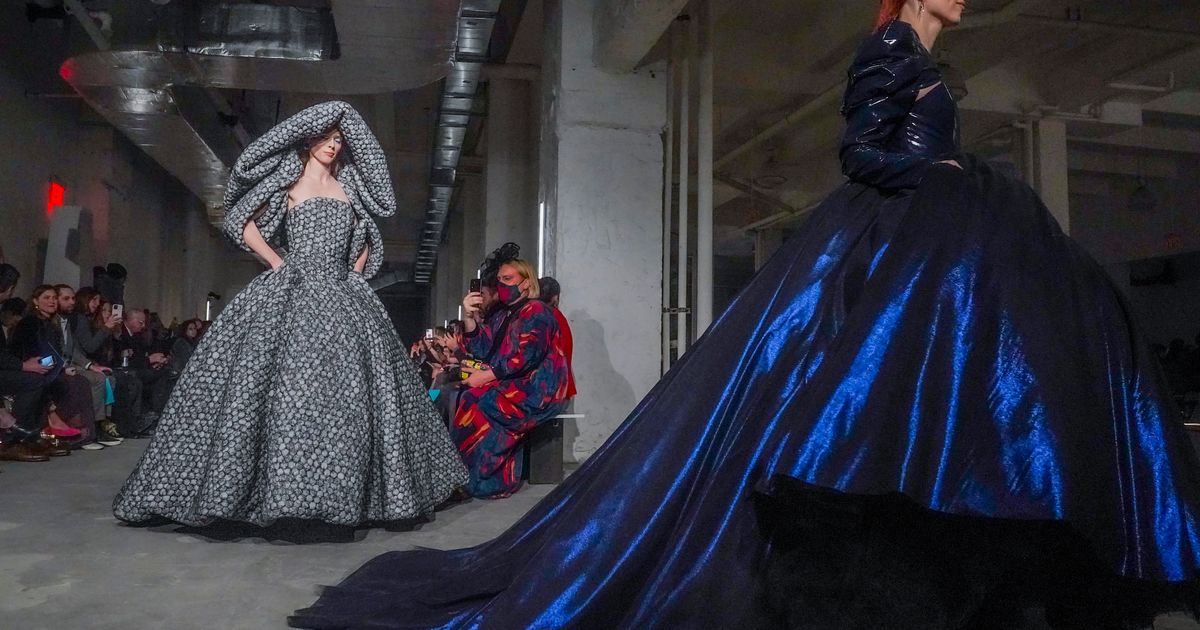 In the bowels of the Empire State Building, on a bare concrete floor, Siriano unfurled his huge signature ball gowns in a variety of colors and textures, including one in gray tweed with a huge hood and another in lustrous steel blue with spiked sleeves, worthy of the Jetsons. Before that, there were a number of looks in the experimental collection he calls “Victorian Matrix”.

“I feel like we lived in it. Are we living in Victorian times? Are we living in this alternate world? Like what is this? I think that’s how I approached the collection,” he told The Associated Press. “I felt like I wanted it to be that kind of dream fantasy world. And hopefully we escape when we get under the Empire State Building.”

His buyers would be prepared to flee in one of his long, cozy quilted coats in a blue and white swirl design. Others fled in baby blue dresses or a lighter blue in a ruffled see-through pantsuit. Perhaps they would wear his sheer black polka dot off the shoulder corset dress with the structured ball skirt.

There was plenty to choose from for Fall-Winter as the world sorts itself out, some outfits more wearer-friendly than others.

The Project Runway mentor and presenter, who launched his eponymous womenswear brand in 2008, spanned a range of looks in bold black and taupe. There was a bell bottom outfit with a ruffled strapless bodice that would require a bold fashion confidence. He sent out one model in a mini dress version of the plaid with a huge circular statement head topper that is as eye-catching as fashion can get.

His latest ball gown offerings also came in plaid, one with a full skirt paired with a long-sleeved, midriff-baring bodice with a cut-out back.

“The pandemic is ongoing and we can’t seem to get away from it, so I can’t help but wonder what our world will be like afterward,” Siriano said in his show notes. “What will become of the fashion industry? And how will our customers shop?”

If they choose, Siriano will be ready with a soft pink corset with a ruffled neck, which he showed off with a cream skirt that slid across the floor, raising dust like other looks did as his models walked the barren, underground catwalk .

Some of his guests cheered on his models as the show progressed. Hannah Waddingham from “Ted Lasso”, Susan Sarandon and Siriano’s mainstays Danielle Brooks (who recently wore it to her wedding) and Alicia Silverstone sat in his front row with Drew Barrymore and Candace Bushnell.

Thank goodness Iggy was there as a therapy dog ​​before Siriano put on this dream show. Waddingham posed for photos and held the diminutive TikTok and Instagram star with a big smile on her face.

This story has been updated to correct the name of Christian Siriano’s Italian Greyhound Tika the Iggy.

Inmates complain about lack of clothing, toiletries and other items in Missouri prisons | law and order