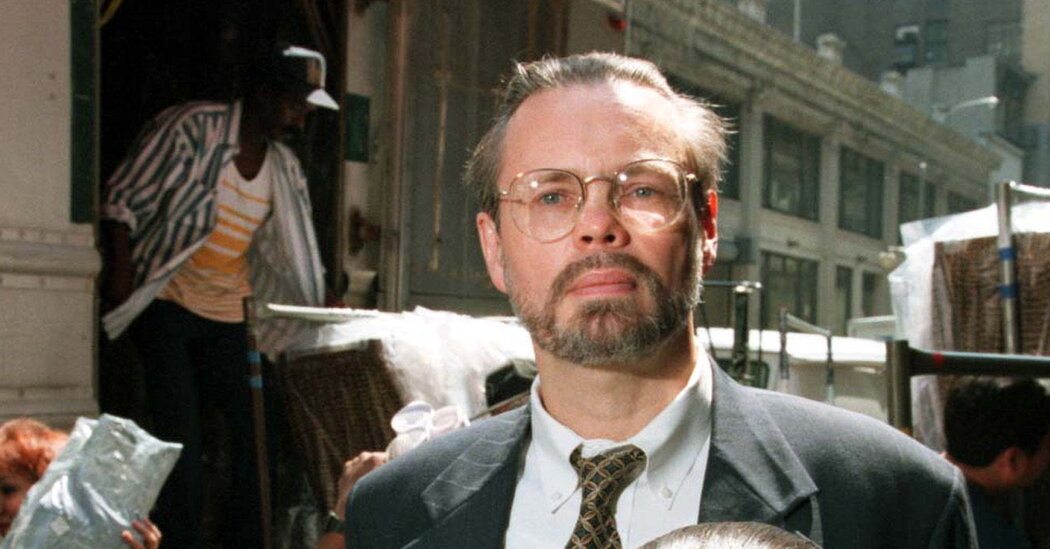 Charles Kernaghan, who with single-minded passion and unflagging energy uncovered the proliferation of sweatshop-made goods throughout America’s toy departments, department stores and famous clothing lines, died June 1 at his Manhattan home. He was 74.

His sister, Maryellen Kernaghan, announced the death but did not give a reason.

As the longtime director of a humble organization called the National Labor Committee, Mr. Kernaghan was among the first activists to show that the seemingly magical price collapse for a wide range of consumer goods in the 1980s and 1990s was a result of American companies’ shifting production to developing countries, where workers toil for pennies an hour, often in dangerous conditions.

He specialized in the high-profile takedown and pursued brands like Nike, Disney and Walmart. He targeted Bratz dolls, Eddie Bauer outdoor wear, and Microsoft wireless mice. In 2007, he showed that crucifixes sold at St. Patrick’s Cathedral in Manhattan came from a Chinese sweatshop.

A self-proclaimed introvert, Mr. Kernaghan became a different person in front of an audience. He could talk for hours, rattling off stories and dates in a way that put a human face to the free trade debate.

“He had a worldview that said behind all the happy talk about the apparel industry and corporate social responsibility is actually a brutal, exploitative industry based on a global race to the bottom, and he took it upon himself to do this to expose hypocrisy,” said Mark Levinson, chief economist for Workers United and the Service Employees International Union, in a telephone interview. “And he did it brilliantly.”

Mr. Kernaghan’s first major revelation came in 1992, when he and his colleagues showed how American foreign aid subsidized the construction of sweatshops in the developing world. Their report, which formed the basis of a “60 Minutes” segment, led to legislation banning US support for factories that fail to meet labor and safety standards.

In 1995, after spending months investigating factories in El Salvador that supplied Gap, he released a report showing the clothing company‘s reliance on sweatshop workers. To get his point across, he took one of the workers, a 15-year-old girl named Judith Viera, on a 14-city speaking tour.

At first, The Gap denied its allegations; then it blamed its suppliers. But after protests broke out against the company, it agreed to allow independent observers into the works.

While Mr. Kernaghan was on a research trip to a Gap supplier in Honduras, a worker slipped him a label with a different name: that of TV presenter Kathie Lee Gifford. Making $9 million a year, she licensed her name to a brand that sold at Walmart and boasted that a portion of the proceeds went to charity.

Mr. Kernaghan researched further, and in April 1996 he told Congress what he had found: To make Ms. Gifford’s clothes, girls as young as 15 worked for 31 cents an hour, 75 hours a week.

Two days later, on her show Live With Regis and Kathie Lee, Ms Gifford fought back tears as she tried to defend herself and called Mr Kernaghan’s testimony “a vicious attack”.

But she eventually agreed to allow monitors, and Mr Kernaghan — now known as “the man who made Kathie Lee cry” — became a force for the apparel industry to reckon with. In 1997, he chartered a plane to fly over the Academy Awards in Los Angeles, trailing a banner that read “Disney Uses Sweatshops.”

“Charlie had a knack for public relations,” said Jo-Ann Mort, a communications consultant who worked with garment industry unions, in a phone interview. “He knew how to draw public attention to the issue.”

When he wasn’t in Central America or Asia, he was touring the lecture circuits. He gave up to 85 speeches a year, often with a sweatshop worker in tow or with a bag from which he pulled a T-shirt or sweater and shouted, “There’s blood on that garment!”

He often spoke on college campuses and in the late 1990s helped inspire the student anti-sweatshop movement, which in turn became a significant part of the anti-free trade coalition of the 2000s.

“He was a dynamic speaker who could debate these issues with anyone,” said Peter Romer-Friedman, a civil rights attorney who helped spearhead the anti-sweatshop movement on campus as a student at the University of Michigan and who Mr. Kernaghan as a mentor. “He was just one of those guys, you could feel the passion in your bones.”

Charles Patrick Kernaghan was born on April 2, 1948 in Brooklyn. His father Andrew was a Scottish immigrant who installed acoustic panels and his mother Mary (Znojemsky) Kernaghan was a volunteer social worker born in what was then Czechoslovakia.

His parents instilled in Charles a strong sense of social justice: raising more than 20 children, they pushed him, his sister, and brother into community-oriented careers. (His sister worked for a charitable organization and his brother John, who died in 1990, was a Jesuit priest).

His sister is his sole immediate survivor.

Mr. Kernaghan received a degree in psychology from Loyola University in Chicago in 1970 and a master’s degree in the same subject from the New School for Social Research in Manhattan in 1975. He later taught at Duquesne University in Pittsburgh, but he soon gave up his academic pursuits.

For a while he drifted. In America and on extensive journeys through Europe and the Middle East he worked as a carpenter, steward and stevedore; He once drove a cab late at night in New York City with a hatchet on his dashboard to discourage robbers.

He also took up photography and aspired to use his camera to expose social injustices. In 1985, Mr. Kernaghan took part in a peace march in El Salvador organized to protest government-sanctioned violence against priests and labor leaders. He brought his equipment and several of his photographs appeared in major newspapers, including the New York Times.

It was during this trip that he first encountered members of the National Labor Committee in Support of Democracy and Human Rights in El Salvador, a tiny New York-based organization operating out of office space provided by a garment workers’ union. This made him active in the movement to expose America’s role in supporting right-wing violence in Central America, eventually joining the committee’s staff. In 1990 he became director.

As he deepened his involvement, Mr Kernaghan received threatening phone calls telling him to stop his activism. One night in 1988, he was asleep in his Manhattan apartment when a man came through the window, announced, “I’m going to kill you,” and stabbed him in the chest with a bread knife.

Medics took Mr Kernaghan to the hospital, but when doctors told him he had no life-threatening injuries, he slipped and was back at work days later. The attacker was never caught.

Mr. Kernaghan’s group relocated to Pittsburgh in 2008 at the invitation of the United Steel Workers Union. It also changed its name to the less cumbersome Institute for Global Labor and Human Rights.

In 2017 he announced his retirement. But he insisted there was more to be done.

“If our clothes could talk,” he told the Pittsburgh Post-Gazette in 2012, “they would scream.”