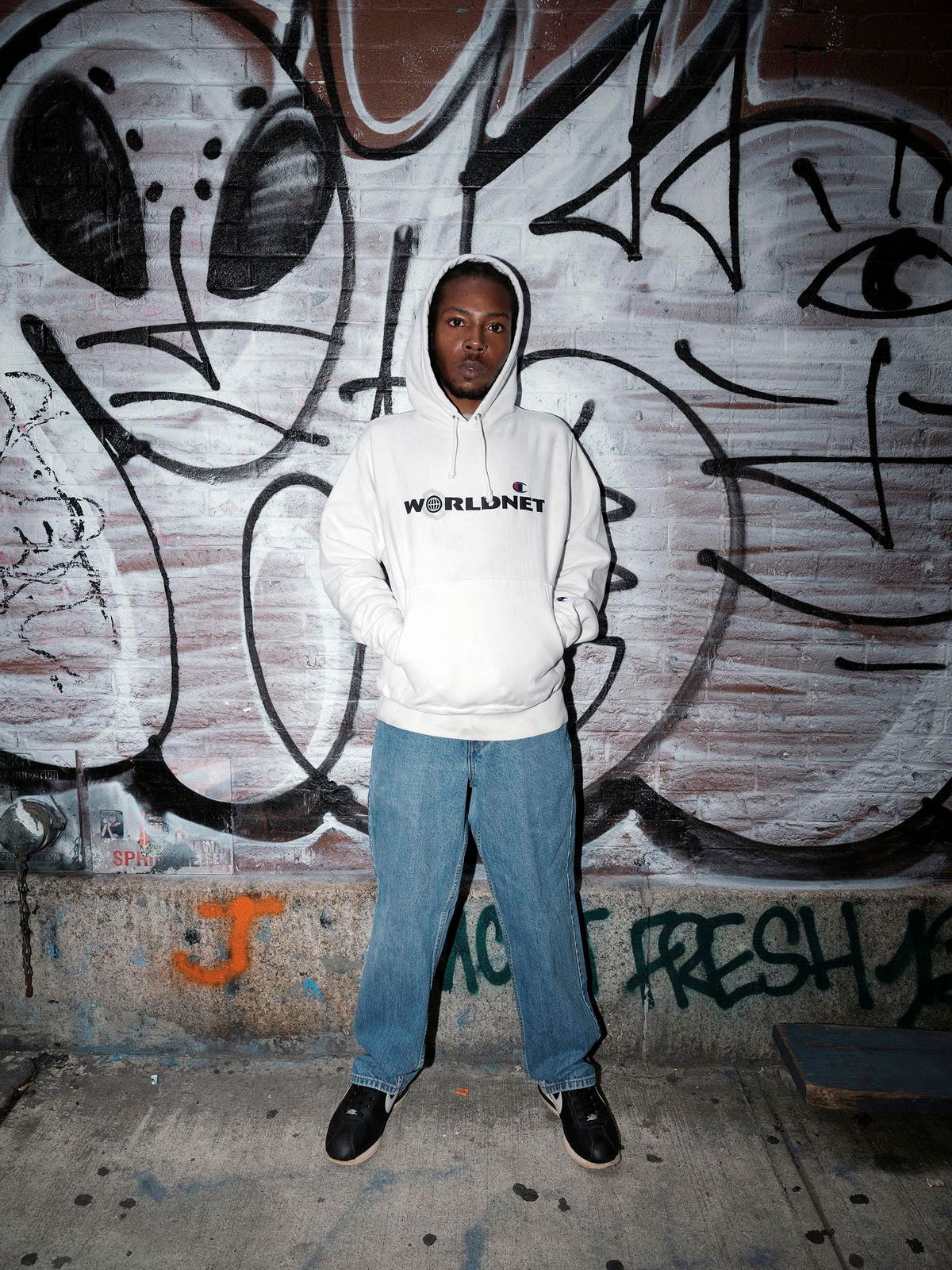 If you know what kind of company Worldnet is, you’re probably a fashion industry insider. The premium logistics service has been serving elite fashion figures and celebrities for 25 years, ensuring their black tie and wedding dresses arrive on time at the red carpet and church respectively.

Over the years, the company hoodie has developed into a coveted piece of clothing for connoisseurs. Worldnet has released several versions of the hoodie over the years. Now it’s launching a 25th anniversary edition in partnership with Byronesque.

Since Worldnet was founded in 1997 to deliver the world’s best fashion around the world, the staff hoodie has been worn by the likes of Frank Ocean and the late Virgil Abloh, not because they were paid to wear it, but because they wanted to wear it .

Twenty-five authentic vintage hoodies from the eighties and early nineties are gifted to designers, stylists and editors from Suzanne Koller to Stephen Jones who have relied on Worldnet over the years. Worldnet has often saved the celebrity shoot, show, sale or red carpet when other delivery services failed.

Richard Bhullar, co-founder of Worldnet with his sister Mary, said of the Byronesque Anniversary Hoodie: “We are so proud to celebrate 25 years as a fashion supplier. We could not have foreseen that the Worldnet Hoodie would become a part of our customers’ fashion wardrobe. We have been shipping Byronesque’s rare vintage collections all over the world for a long time and when [cofounder] gill [Linton] suggested that we do a vintage version of the hoodie, it made perfect sense that we should do that with them.

Linton said, “Worldnet has supported us since our inception, not just because we ship special vintage items all over the world, but because they support creative integrity and help make this possible. They are so much more than a shipping company, they understand the fashion business and honestly they are the ones who make it work.”

“It started a few years ago with a DKNY PR girl and the social media she was posting,” Bhullar said. “Then we got requests from our customers for the t-shirts and hoodies. She wrote an article. From there it kind of went on. It became a fashion industry thing.

“Frank Ocean reached out and wanted to do a black hoodie in 2018,” Bhullar said. “It was a limited edition. Nike reached out to us and said, ‘How did you work with Frank Ocean? He doesn’t work with anyone.’”

“We kind of rebranded ourselves and went from a blue hoodie to a black hoodie,” Bhullar said. “Even now we’re still getting requests for the blue hoodie. We make them like some kind of giveaway for customers. Last year we designed a pink hoodie for Breast Cancer Awareness Month. We didn’t do it to get sated, so we do it about once a year.”

“This year, to celebrate our 25th anniversary, we designed a black hoodie with a silver logo. The black and silver is around the anniversary,” said Bhullar. “Then Gill got in touch and wanted to do something different. So we do a round with different hoodies.

Worldnet is a premium logistics provider with a strong focus on fashion. About 80% of the business is in fashion. “It can get very complicated when you’re dealing with different time zones and customs-related rules and regulations,” Bhullar said.

Bhullar had some interesting assignments. “Every show that we deal with on a daily basis is extremely important and time sensitive,” he said. “It’s interesting because we’re dealing with celebrities and VIPs. Everything we move always has this high urgency.”

Worldnet also had a connection with royalties. “We picked up Meghan Markle’s wedding dress from Givenchy in Paris. That was really interesting. We knew it was super secure because we needed high security while traveling. We did it in the middle of the night the day before the wedding. At midnight in Paris, we drove it to a location outside of Buckingham Palace. It was boxed and couldn’t be opened and the driver couldn’t know what it was. That was one of the most famous shows.”

There have been many of these over the years, Bhullar added. “We’ve done Super Bowl events, the Oscars, the Emmys, the VMAs, the Cannes Film Festival is a big film festival for us every year,” he said. “There is also the Venice Film Festival. Art Basel was a big event in Miami last year. We’re at the premiere, the red carpet event, we usually move a lot of products behind the scenes.”

Discretion is an important attribute in the high stakes business. “Ensuring it’s picked up on time and delivered on time, and dealing with customs,” Bhullar said. “These are international shipments. Most recently we did Jennifer Lopez and Ben Afleck’s wedding in Savannah. We did all the wedding party, the wedding dress and groom’s suit and all the wedding party’s dresses. That was Ralph Lauren Couture.

“Our services are at different levels,” Bhullar said. “We have our premium services where we collect and it goes on a passenger plane. If it is really very urgent, we will have it carried by hand where someone will actually fly with the product and be responsible for it. We do shows like this every day. It’s all different levels of urgency, security. We have had offices in New York, Los Angeles, Paris, Rome and Milan for over 25 years.”

Worldnet was involved with a number of different brands for the World Cup in Doha. “There was a fashion event there,” Bhullar said. “Last year we were involved with the entire event for Coach and the parents of Tapestry, organizing all the products from their New York City showroom and then shipping them to Shanghai and then bringing that product back as well. The entire collection was sent. Sometimes it can also be a dress, a pair of shoes.

“We’ve done complete collections for Tom Ford, Alexander McQueen and Balenciaga,” said Bhullar. “We do a lot of big, big events. It’s an interesting world behind the scenes of fashion. There is also a lot of compliance. Shipments can get stuck in customs. That’s also part of what we do. It’s been a tough two years with Covid. There has been a lot of disruption in supply chains and the movement of products to celebrity homes.”

Worldnet provided President Joe Biden’s Ralph Lauren suit for his inauguration two years ago. “What happens is you kind of get into a rhythm of what works and what doesn’t. There are also things that are beyond your control. Things get lost on the airlines or get delayed on the airlines. There are real-time GPS trackers that are on the broadcasts.”

Worldnet employs 220 people in its five branches worldwide. “We have to work around the clock. It’s also really interesting work, the kind of product you transport. What’s in the box makes it important and exciting.

“Me and Mary have been doing this for a long time,” Bhullar said. “We have both been in the industry for over 30 years. Maybe we’ll write a book when we retire. It’s so exciting what’s happening in the industry today. In 25 years the industry has grown and in a way we have grown with the fashion industry.

“Some of these luxury brands had two boutiques in big cities 25 years ago,” Bhullar said. “Fashion has changed and evolved and grown and Worldnet has grown with it. We work with Chanel, Dior and Fendi and Ralph Lauren. New brands that are startups are really exciting to see, as well as collaborations with luxury brands and sportswear brands. It’s great to be recognized in the industry for what we do.”