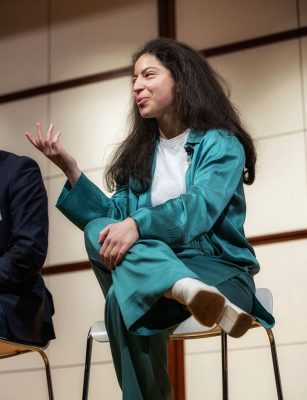 Ameera Hammouda said she was “born to be an entrepreneur” and dreamed of having her own clothing brand since she was a child. Well, that’s their reality.

Hammouda, a 2018 graduate of Boston University’s Questrom School of Business, is the CEO and Founder of ameera – a clothing brand that embraces understated style and strives to challenge societal stigmas and norms. Hammouda said she wants to connect fashion to a higher purpose in her company, to serve a specific community and spread awareness.

“Especially when it comes to modest fashion, there’s such a stigma about this whole community and how they dress and it’s like, ‘Oh, she’s being oppressed,'” Hammouda said. “So I thought, no, I can show people that people choose to dress like that and it can be beautiful and empowering.”

Hammouda officially launched and gifted her brand in June 2021 Instagram Account of a reboot that she said was previously dedicated to her jewelry business. Her business is entirely online, she ships internationally, has done a few pop-ups and is hoping to do her first pop-up in New York this year.

“I’m a bit scared of getting too involved with fashion and trends because then I feel like I’m losing my own creativity,” Hammouda said. “My personal style was so important to me because I was so interested in clothes, and I didn’t have a lot of clothes.”

Special care and time is given to their products to ensure their clothes are worth putting on the market and that they can be versatile, she said. She’s hoping to release more styles in the future, but for now, she’s released a colorful range of blouses, pants and scarves made from “biodegradable, machine-washable silk and carbon-positive hemp fabric,” according to Ameera’s website.

In addition to her brand, Ameera also launched a newsletter, Americanto combine her passions for writing and fashion and to open a place to discuss modest fashion in the lifestyle of Muslim women that hasn’t really been talked about before, she said.

“Changing all the stigmas and changing all the fake news or whatever out there around these women… [Ameeracan] can be a place where I can discuss these issues,” Hammouda said. “And I also realized that allowing more people to interact with the brand who might not have been able to do so is a rather expensive brand.”

Ameeracan has “room to grow” and the newsletter isn’t exactly where she wants it to be, but she reminds herself, “You have to start right somewhere.”

Hammouda also said aside from making the clothes herself, she had been involved “in all aspects” of her brand and learned a lot from mistakes and things she didn’t expect.

“It was definitely difficult, especially as an amateur as I don’t have a formal fashion background,” Hammouda said. “I think that’s definitely one of the biggest challenges, but like I said, I’ve found some great people who can help me answer very specific questions like, ‘What kind of seam do you want? And I’m like what? I thought everything had the same stitch.’”

She said she’s also received a lot of support from friends, family and professors at BU, citing Peter Marton and Jodi Luber.

“I first met Amira when she was performing in my entrepreneurship class over at business school,” said Marton, a senior faculty member at Questrom. “I was immediately struck by their determination, creativity and thoughtfulness.”

Marton also said that one of Ameera’s strengths is her authenticity – she didn’t just reflect the movements like other entrepreneurs.

Luber, associate dean and associate professor at the College of Communication, said she first met Ameera when she was the only Questrom student taking one of her courses.

“But behind the amazing style is an extremely talented and focused entrepreneur who is serious about the business. She’s got grit,” Luber said. “I listened to her talk about sales, manufacturing costs, production and supplier relationships like she had a 20-person team behind her, and she had to learn all those things on her own.”

Luber said Hammouda’s success is a credit to an “untapped niche” she’s found in her brand and what she stands for “is meaningful to a lot of women.”

Simone Rocha on the impact of motherhood on her work