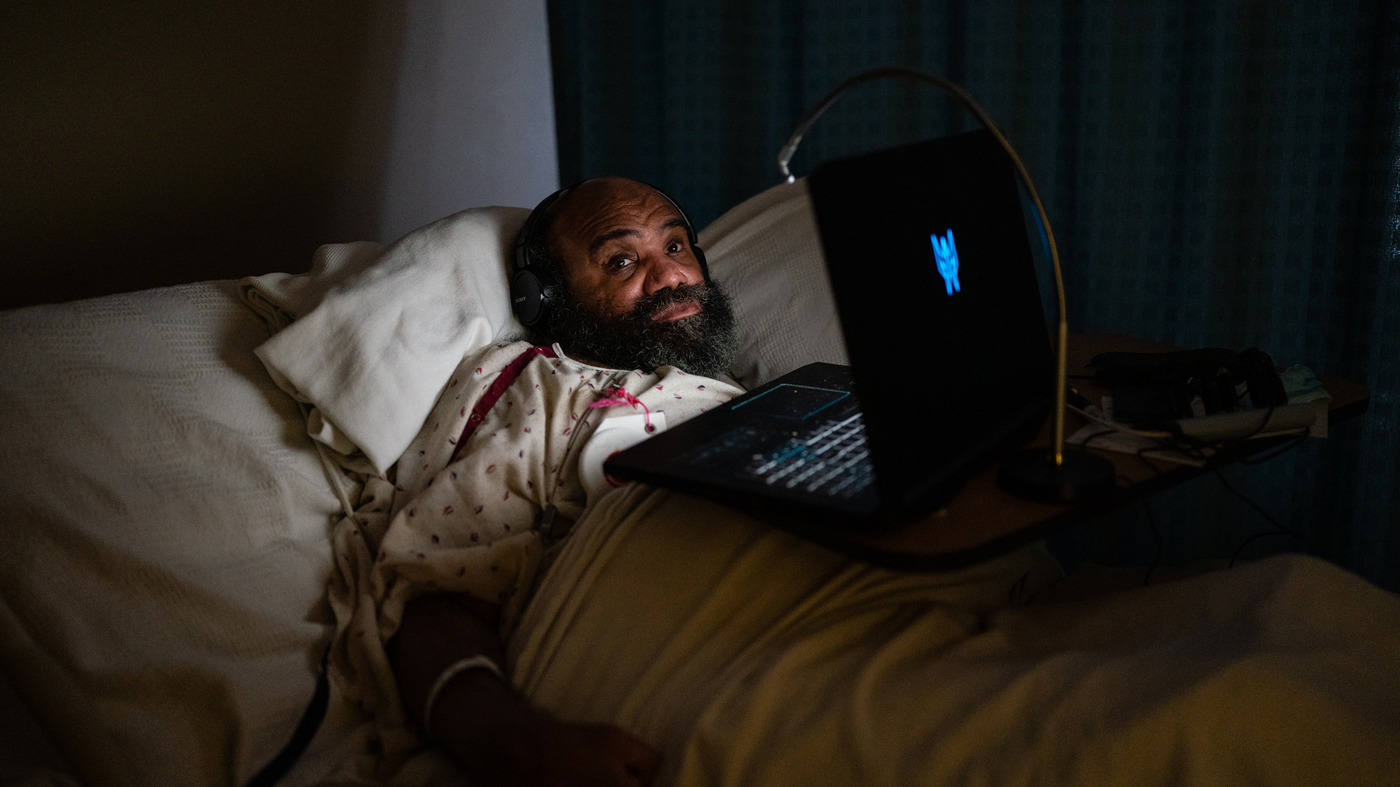 Maurice Miller lay in bed Thursday in his room at a nursing home in Takoma Park, Md. The Biden administration plans to establish a federal minimum staffing requirement for nursing homes as part of a broader push to improve care for seniors and people with disabilities.

Maurice Miller lay in bed Thursday in his room at a nursing home in Takoma Park, Md. The Biden administration plans to establish a federal minimum staffing requirement for nursing homes as part of a broader push to improve care for seniors and people with disabilities.

A decade after suffering a stroke that changed his life forever, Maurice Miller is having good days and bad.

On a good day, the staff at his Takoma Park, Md. nursing home can attend to all of his basic needs: feeding him, cleaning him, changing his hospital gown and making sure his laptop, which he uses for dictation, is charged and within reach.

Things go wrong on bad days and it takes a while before someone is available to respond to their call button – sometimes 45 minutes or more.

“It’s a bad day when I’m in pain and I won’t get relief in time,” says Miller, who describes himself as a functional quadriplegic.

It’s also a bad day when he can’t call his 94-year-old mother because his computer is out of reach. Or if his roommate is in some kind of crisis and help doesn’t come immediately. Or if he misses his wheelchair time because there aren’t enough staff to lift him out of bed.

Maurice Miller’s call button is pinned to his dress. When pressed, a light goes on in his room, above his door, and in the nurses’ station at his nursing home in Takoma Park, MD.

The bad days tend to be those when the facility is understaffed. Lying in bed in his darkened room, Miller usually knows when fewer than five nursing assistants are caring for the 50 or so residents in his hallway. He hears about this from the staff, who apologize for the long wait and ask for patience.

Stories like Miller’s – and far worse – have prompted the Biden administration to call for sweeping reforms in nursing homes. Earlier this year, the White House outlined an ambitious plan to improve the safety and quality of home care, primarily by establishing a minimum federal staffing level for Medicare- and Medicaid-funded nursing homes.

“We think it’s really important to have a very specific standard to measure against to really make sure the staffing is appropriate to ensure quality,” says Chiquita Brooks-LaSure, administrator of the Centers for Medicare & Medicaid Services (CMS). federal agency which regulates and funds most nursing homes in the United States

Numerous studies have shown that nursing home understaffing can harm the health of residents, who suffer from more pressure ulcers, more weight loss, more antipsychotic medication prescriptions, and – during the pandemic – more COVID-19 cases and deaths.

Brooks-LaSure says her agency will determine how staffed nursing homes should be and then enforce that through a rule. It aims to have a rule in place within a year, an optimistic timeframe given the lengthy federal legislative process and other challenges.

The American Health Care Association, which represents 14,000 long-term care facilities, has questioned the government’s authority to enact such a rule without congressional involvement. Its president, Mark Parkinson, has also argued that such a requirement is “unrealistic” and “not possible” because care homes cannot find workers.

Nationwide, nursing homes have shed more than 240,000 employees since the pandemic began, according to the Labor Department. Facilities across the country are grappling with numerous vacancies due to staff attrition during the pandemic.

“If you had a minimum staffing requirement that you couldn’t run, if you couldn’t meet it, that would shut down every building in the country,” Parkinson said during a media briefing after the government’s release of the plan.

A worker wearing protective gloves administers eye drops to Maurice Miller in his room at the nursing home.

The federal government has already established some staffing requirements — for example, each facility must have a registered nurse eight hours a day — but the core language is vague.

The 1987 Nursing Home Reform Act, which brought sweeping changes to the industry, requires facilities to be “sufficiently” staffed to enable residents to achieve or maintain their “highest possible” level of physical, mental and psychosocial well-being.

“So that each person has exactly what they need to be their best and live their best life,” says Robyn Grant, director of public policy and advocacy at Consumer Voice, a group focused on long-term care. “What has been so ambiguous and subjective is how ‘sufficient’ is interpreted.”

In Baltimore, Holly Ward is a geriatric nurse at a nursing home that received an “above average” staff rating from CMS. Nevertheless, in some shifts she has to dress, feed, clean, change, change up to 13 residents. One after the other.

“So it becomes like an assembly line,” says Ward.

Holly Ward worked as a geriatric nurse in a Baltimore nursing home for four years. On some days, she has to look after up to 13 residents in one shift.

And none that runs smoothly. Ward will find that while she is tending to one resident, another is incontinent. This resident may end up waiting for a while in soiled bedding.

“To take care of them, you have to give them dignity. That’s the main factor they emphasize at work, but they don’t give us the staff to do it,” says Ward.

To meet each resident’s basic needs, Ward says she often skips other important components of their care, such as speaking to them and providing emotional support.

“They look to you for comfort, but then if you don’t have time to give them the comfort they deserve, that’s not fair,” Ward says. “And then it’s on your conscience.”

Maryland, where Ward works, actually has minimum nursing home staffing requirements, as do most states. But those state-level requirements are all lower than what the federal government recommended more than two decades ago, when the issue was last examined.

In a 2001 report, CMS found that nursing home residents should receive at least 4.1 hours of direct care each day to avoid poor outcomes. In 29 states, including Maryland, the minimum staffing requirement is 3.5 hours or less, according to an analysis by Consumer Voice. In some states, the minimum requirement is half the recommended level.

The only place that has adopted the federal government’s guideline of 4.1 hours of care per day is Washington, DC

“We think about hitting the numbers every day,” says Tina Sandri, CEO of Forest Hills of DC. “It was a daily struggle before COVID. It is even more so now.”

Sales at her facility, which is home to about 100 residents, are nearly three times what they were before the pandemic.

Forest Hills of DC CEO Tina Sandri posed for a portrait in the courtyard of the nursing home in Washington, DC last week.

Burnout and competition are important factors.

Sandri struggles to get certified nursing assistants in the door, who typically start at $15.20 an hour. Four out of five people who initially express interest in a job don’t come to an interview.

As a nonprofit, Forest Hills of DC doesn’t have the bandwidth to increase wages, Sandri says. Like most nursing homes in the US, it relies on Medicare and Medicaid for most of its funding. If the government doesn’t increase the amount it pays for care in nursing homes, says Sandri, “we just don’t have it in our piggy bank.”

To meet Washington DC’s staffing needs, she has her employees stretched “to the bone.”

“They’re tired. They’re burned out. They’re physically exhausted, and even committed people in this industry will turn around and say, ‘I don’t know how much longer I can keep going,'” says Sandri.

She opposes a federal minimum staffing requirement, noting that the government already has the power to cite nursing homes for understaffing. Why hold institutions to a number when there are no people to fill the jobs?

The government wants to investigate how taxpayers’ money is being spent

CMS Administrator Brooks-LaSure says she’s listening to industry concerns, including calls for more money to keep up with rising costs, particularly labor costs. But she also examines how taxpayer money that goes into nursing homes, particularly those owned by private equity firms, is being spent.

“Are we good with our dollars? She asks.

At Takoma Park, Maurice Miller doesn’t blame the employees who left his facility for other jobs in recent weeks. After two years of the pandemic, he says it’s time for her to take care of herself.

But he appeals to younger people to consider a job in a nursing home.

How is VR changing retail?