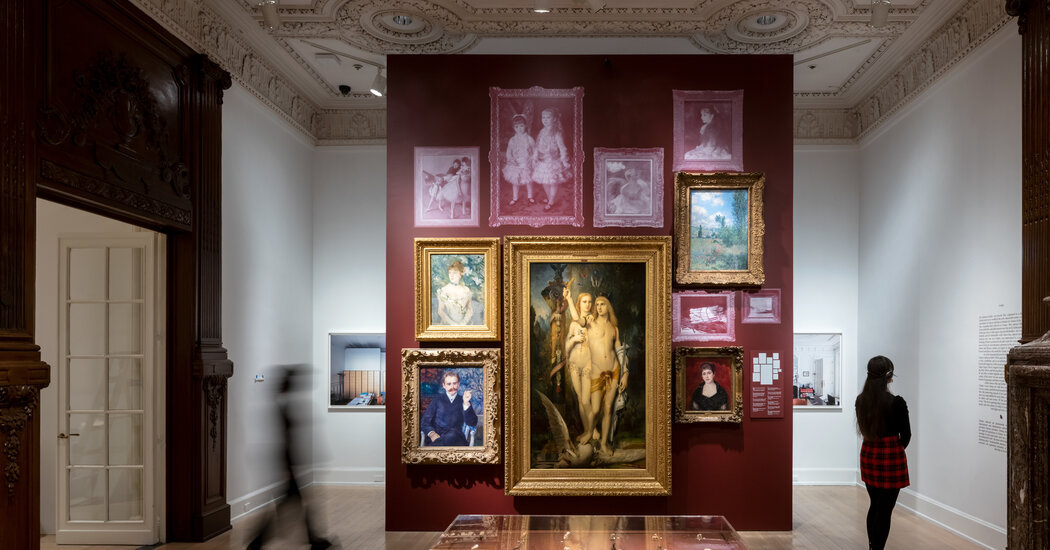 A rabbit and a once-hidden legacy in the Jewish Museum

In his bestseller The writer and ceramist Edmund de Waal traces the journey of his Jewish family and their art collection from the late 19th to the 21st century â€œThe Rabbit with Amber Eyesâ€. Combining history and memoirs with a kind of object-oriented ontology, the book draws parallels between the Jewish diaspora after World War II and the scattered estates of the Ephrussi family (many of them looted by the Nazis). It begins with the author’s inheritance of a collection of Japanese netsuke, palm-sized carved sculptures from the Edo period that have been in the possession of his Ephrussi relatives for generations.

“I would like to know the relationship between this wooden object that I roll in my fingers – hard and tricky and Japanese – and where it has been,” he writes about the feeling of handling one of the netsuke. â€œI want to be able to grab the door handle and turn it and feel it open. I want to enter every room this object has lived in, feel the volume of the room, know what pictures were on the walls, how the light fell from the windows. And I want to know whose hands it was and what they felt about it and thought about it – when they thought about it. I want to know what happened. “

Admirers of the book can now get almost as close to the netsuke and other parts of the Ephrussis collection in a compelling and haunting form exhibition in the Jewish Museum in New York, also with the title “The Hare With Amber Eyes”. Based on an earlier exhibition in the Jewish Museum in Vienna (â€œThe Ephrussis: Travel through Timeâ€œ), It uses art, design, photography, sound, and ephemera to recreate the sophisticated, sophisticated, and sometimes extravagant life of the family and the efforts of various family members to save parts of that life in exile.

The well thought-out installation by Diller Scofidio + Renfro makes full use of the fact that the Jewish Museum was once a private house of a banker and plays on the Ephrussi houses the architectural peculiarities since the museum’s existence in the Felix M. Warburg House. (De Waal worked with Elizabeth Diller of DS + R and the Jewish Museum’s senior curator Stephen Brown and assistant curator Shira Backer.)

The installation is also closely based on de Waal’s narrative, with a sound component that combines displays with readings of excerpts. There are large stretches of fin-de-siÃ¨cle Paris and early 20th-century Vienna (They were also bankers, although the family business had its origins in Odessa grain distribution.)

And like the book, the show keeps revolving back to netsuke – it reveals them in groups with four different glass cabinets spaced out – to underscore the persistence of these objects over a century of violence, discrimination, and dispossession.

The galleries also show pictures that were taken by the Dutch photographer this year Ivan Baan, shows the interiors of the former family residences in Paris, which now house lawyers and health insurance offices, and Vienna, recently the seat of Casinos Austria and now partially uninhabited, with a Starbucks on the ground floor. In a picture from Paris, elaborate cornices are barely visible above rows of filing cabinets and stacks of paper; in Vienna gilded rooms lit by chandeliers have empty bookshelves and bare curtain rods. With their attention to the banality of the present, these photographs prevent the exhibition from becoming the kind of story that de Waal absolutely wants to avoid, “an elegiac Central European narrative of loss,” as he writes.

In the installation, as in the book, the story of the family collection from the late 19th unfolds. This distant relative of de Waal was so entangled in artistic and literary circles that he appears in the background of Renoir’s famous painting â€Boat party lunch“, Overdressed for the occasion in a dark jacket and top hat, and is said to have been an inspiration for Proust’s character Charles Swann from” In Search of Lost Time “. These references didn’t stop the increasingly emboldened anti-Semites of his day from shooting him, including Renoir, who described: Gustave Moreau painting in Charles’ collection as “Jew Art” with an emphasis on their golden palette.

The Moreau here is part of a salon-like installation that, in a somewhat clumsy way, combines actual paintings with sepia-colored reproductions. Mary Cassatt’s “At the Theater” once in Charles’ collection and now in the Nelson-Atkins Museum, can only be seen here as a picture, as is Manet’s bundle of asparagus commissioned by Charles (and part of a humorous exchange that made Manet feel overcompensated for the painting , sent Charles another painting of a single asparagus stem). Berthe Morisot’s strong bushy “Young girl in a ball gown“Is on loan from the MusÃ©e d’Orsay, accompanied by an excerpt from Charles’ letter about the artist:” She loves to paint cheerfully and lively, and she grinds petals on her palette to sprinkle them on her canvas with light and wit touched.”

The Viennese branch of the family founded by Karl’s uncle Ignace von Ephrussi is the focus of another gallery for art and ephemera – a large part of it focuses on the Palais Ephrussi, the “absurdly large” (in de Waal’s words) and equally opulent five-story House on the Ringstrasse, designed by Theophil von Hansen, the architect of the Austrian Parliament. Hansen’s preliminary drawings for the building’s lavish ceilings can be seen as well as drafts for the ceiling paintings that Ignace had commissioned from Christian Griepenkerl (the decorator of the Vienna Opera Hall); The scenes that adorned the ballroom include stories from the Book of Esther, alluding to the family’s religious and cultural heritage.

Ignace did not seem to have the same eye for the art of his time as his nephew Charles and preferred old masters and later works in this style by Dutch, German and Austrian artists; The examples exhibited include the German artists Balthasar Denner‘s Portrait of an Old Woman and a Muted Street Scene from 1870 by the Dutch landscape painter Cornelis Springer. Ignace’s son – and de Waal’s great-grandfather – Viktor, who inherited the family business and the Palais Ephrussi, was more of a bibliophile. Viktor’s wife Emmy, on the other hand, had a flair for fashion, as evidenced by photos of her in various formal outfits and costumes. (In one she is disguised as the Renaissance noblewoman Isabella d’Este, in another as a schoolmaster from a Chardin painting.)

However, Emmy was the keeper of the netsuke she and Viktor had received from Charles as a wedding present and which she displayed in a display case in her cloakroom. And according to family stories, it was Emmy’s maid who was only identified as “Anna” in de Waal’s book – although the catalog of the Vienna exhibition suggests, fascinatingly, that such a person did not exist – who protected the netsuke when the Gestapo inscribed it Ephrussi marched into Palais, stowed it in her apron pocket and later hid it under her mattress. This show doesn’t solve the mystery of Anna or how the netsuke stayed with the Ephrussis, but shows reproductions of documents – including a meticulous Gestapo inventory of the family home – that painfully illustrate the extent and thoroughness of the looting.

The dissolution of the family through the war, with Edmund’s grandmother Elisabeth (one of Emmy and Viktor’s children) finally ending up in England and her siblings settling in America, Mexico and Japan, is shown in a cleverly designed gallery of family photos centered around a weathered attachÃ© illustrated case. Many of them refer to Edmund’s great-uncle Iggie, a clothes designer who turned banker and gave the Tokyo netsuke a new home (by incorporating them into fashionable post-war Pan-Asian interiors with low couches and Korean and Chinese artwork).

In general, the exhibition could have questioned more critically “Japonismâ€œThe West’s obsessive fascination with Japanese art and design objects, like de Waal in his book. In comparison, the show doesn’t tell us much about the netsuke or what it might have “witnessed” before Charles acquired it as a 264-piece collection from a Paris dealer. When we reach the eponymous rabbit with amber eyes in the last gallery, we can only marvel at the preciousness of his raised paw, his drawn ears and his ever-watchful expression.

But as a family portrait or as a look at the development of collections over generations, the museum version of â€œThe Rabbit with Amber Eyesâ€ is deeply moving. In a time of so much loss, isolation, and separation, it is encouraging to see how the Ephrussis are united with one another and with their art.

The hare with amber eyes

The year in review for fashion